Floods and landslide in Sri Lanka 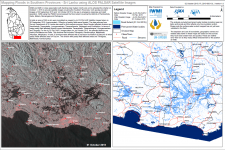 In view of the current floods in Sri Lanka, UN-SPIDER's regional suport office in Sri Lanka (IWMI) has activated the International Charter on Space and Major Disasters with Sentinel Asia.

Flood of 30 September, 2015: At least 18,917 persons have been affected by the severe weather condition prevailing in the Southern Province for several days, the Disaster Management Center  said. Close to 13,057 persons of 3,411 families in the Galle District had been affected by heavy rains, floods and landslides. At least 14 houses had been fully damaged. Kadawathsathara, Habaraduwa, Bope-Poddala and Imaduwa Divisional Secretariat areas were the most affected in the Galle district, the DMC said. Meanwhile, 5,860 persons in Matara District have also been affected due to the bad weather. (Source: Sentinel Asia)

Flood and landslides, as of 28 September 2015: Heavy rain has been affecting most of Sri Lanka since 25 September causing landslides. Approx. 84 mm of rain over 24 h were observed in Trincomalee (Eastern Province) and 75 mm in Galle (Southern Province) over 26-27 September as well as 62 mm in 24 h in Ratmalana and 51 mm in Colombo (Western Province) on 27 September. As of 26 September national authorities report at least seven people dead, three injured, 45 people affected, 286 people displaced and several houses destroyed. (Source: ECHO daily flash of 28 September 2015 on relief web)