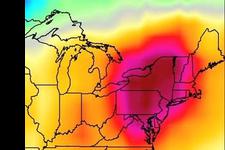 Although they happen more slowly and are more difficult to see than a tornado or an earthquake, "heat waves" and "cold snaps" are deadly natural hazards. Extreme heat and cold occur somewhere in the world every year and can afflict nearly every location on Earth. Heat waves are periods of unusually high temperatures, usually lasting three days to three weeks. Typically, heat waves are characterized by temperatures of 35°C (95°F) or higher, although lower temperatures accompanied by high humidity levels can also be considered a heat wave. Cold snaps are commonly three days to three weeks in duration, with temperatures usually falling below -15°C (5°F).

Heat wave or extreme heat is the temperatures that hover 10 degrees or more above the average high temperature for the region and last for several weeks are defined as extreme heat. Humid or muggy conditions, which add to the discomfort of high temperatures, occur when a "dome" of high atmospheric pressure traps hazy, damp air near the ground. Excessively dry and hot conditions can provoke dust storms and low visibility. Droughts occur when a long period passes without substantial rainfall. A heat wave combined with a drought is a very dangerous situation[2].

A basic definition of a heat wave implies that it is an extended period of unusually high atmosphere-related heat stress, which causes temporary modifications in lifestyle and which may have adverse health consequences for the affected population. Thus, although a heat wave is a meteorological event, it cannot be assessed without reference to human impacts[3].

People living in urban areas may be at greater risk from the effects of a prolonged heat wave than people living in rural regions[4]. Heat wave impacts are widespread. While a large number of deaths may not occur in a single city every year, the cumulative impacts across broad regions over several days to weeks can result in heavy loss of life. Many more hundreds of deaths are associated with excessive heat attributed to heart attack, stroke, and also respiratory stress. Most deaths occur in urban areas where concrete, asphalt, and physical structures raise temperatures in urban heat islands, and nighttime temperatures remain above average. Heat waves also impact farming and ranching through loss of cattle and other livestock. Below are several impacts caused by heat waves[5]:

Learn also about the impacts of the heat wave during the summer 2003 in Europe and the social impacts of heat waves in England.

What you should do if the weather is extremely hot[6]:

Learn also the emergency response on extreme heat in CDC (Centers for Disease Control and Prevention) or learn through community response.

A cold wave is a weather phenomenon that is distinguished by marked cooling of the air, or the invasion of very cold air, over a large area. It can also be prolonged period of excessively cold weather, which may be accompanied by high winds that cause excessive wind chills, leading to weather that seems even colder than it is. Cold waves can be preceded or accompanied by significant winter weather events, such as blizzards or ice storms. Other names of a cold wave include cold snap and deep freeze[7].

Some impacts of cold wave[8]:

Extreme temperatures cannot be forecasted on a long-term basis and cannot be directly mitigated. They can however be managed by proper disaster plans that regulate authorities and emergency facilities in case of a heat or cold wave[10].

International weather forecasts are the main source of information. For this purpose, consult for example:

Regional and National weather service give more precise forecasts and weather information. Below are some examples: