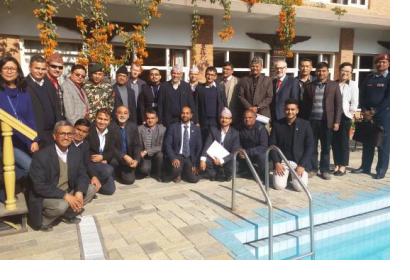 As part of the technical advisory support it provides to countries worldwide, UN-SPIDER carried out an Institutional Strengthening Mission to Nepal from 17 to 21 December 2018 upon the request of the government. The mission was a follow-up activity to the Technical Advisory Mission (TAM) to Nepal in July 2017 that assessed use of space-derived information in all aspects of disaster management and offered recommendations and action plan to strengthen the disaster risk management and emergency response in the country.

The TAM and ISM were conducted with support from the Ministry of Home Affairs (MoHA). The Nepal GIS Society also offered support in organizing the programme.

During the five-day mission, UN-SPIDER distributed the TAM report to the wider community, held coordination meetings with government and United Nations agencies, carried out a training programme, and held a high-level advocacy meeting and a special meeting on the national spatial data infrastructure (NSDI). Through its activities, the mission team made over 65 officials aware of the United Nations Office for Outer Space Affairs (UNOOSA) and the UN-SPIDER programme and its activities.

Through its technical advisory support activities with the Government of Nepal, through MoHA and its National Emergency Operation Centre (NEOC), UN-SPIDER has supported the country in increasing the use and strengthening the role of space-based information in its disaster management efforts.

The most valuable outcome of the 2017 TAM to the country was the insertion by MoHA of text on remote sensing, GIS and Earth observation-based tools into their 2018 Disaster Risk Reduction Policy. As a result of the 2017 mission, MoHA also requested stakeholders to develop a unified and inclusive approach to preparing hazard maps with the support of Earth observation.

Following UN-SPIDER's mission to Nepal, the country’s Survey Department approached the United Nations Resident Coordinator’s (UNRC) Office in Nepal to request UN-SPIDER’s support with implementing a national spatial data infrastructure (NSDI). The process of implementing the NSDI was initiated during the 2017 TAM to the country.

UN-SPIDER maintains close contact to the United Nations agencies present in Nepal, which have integrated recommendation stemming from the TAM into their activities.

The five-day long institutional strengthening mission deepened the engagement of UN-SPIDER with MoHA, NEOC, UN agencies and other stakeholders and strengthened Nepal’s capacities in the use of Earth observation for sustainable development and disaster management.