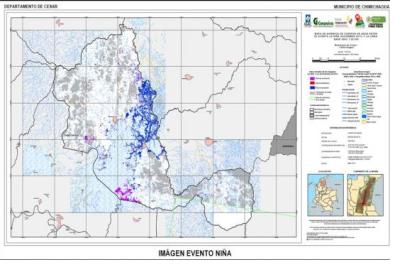 The Colombian Regional Support Office of UN-SPIDER (IGAC) has provided a new Recommended Practice with detailed step-by-step procedures on how to derive useful information from satellite imagery. The practice deals with the changes in the extent of water bodies during El Niño and La Niña events based on optical Spot5 and RapidEye satellite imagery. It can be applied to identify areas that are most exposed to flooding based on historical events. The resulting maps provide useful information for contingency plans to support disaster preparedness.

The test site where this practice was developed is located in the Caribbean part of Colombia. According to a study conducted by the Instituto Geográfico Agustín Codazzi (IGAC) applying the recommended practice, this region is among the most exposed to weather events due to the way the soil is used. The study concludes that the land can be classified as degraded or in the process of erosion, which leads to a lack of water retention capacity of the soils during summer provoking agricultural droughts; on the other hand in winter the terrain cannot regulate the large amounts of water provoking severe flooding.

UN-SPIDER's network of Regional Support Offices and partners are developing further Recommended Practices on the use of space-based information for disaster risk management and emergency response. The practices include detailed information on the data and methodologies used as well as step-by-step instructions. The new practice recommended by the Colombian Regional Support Office is the fourth practice that has been published on the UN-SPIDER Knowledge Portal. It is the first practice published in Spanish language. All practices can be found here.