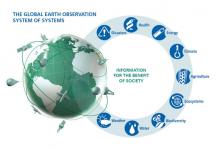 The Group on Earth Observations (GEO) is implemented the Global Earth Observation System of Systems (GEOSS) with the goal to improve access to, and the use of Earth observations for a broad range of stakeholders. The 10 Year Implementation Plan for GEOSS states “GEOSS is a step toward addressing the challenges articulated by United Nations Millennium Declaration and the 2002 World Summit on Sustainable Development, including the achievement of the Millennium Development Goals. GEOSS will also further the implementation of international environmental treaty obligations.”

Although significant progress has been made towards many of the targets for each MDG, in many areas the goals will not be reached and there is an urgent need to lend more support.Science support is needed for many of the targets, and in most cases, Earth observations play a central role in enabling the required research.

The objective of the workshop is to review the science questions and research topics that need to be addressed in order to support progress towards the MDGs and towards meeting the grand challenges, prior and after the current target date for the MDGs, and to identify Earth observations needed to facilitate the research.