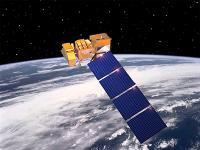 The government-owned Landsat 7 was successfully launched on April 15, 1999, from the Western Test Range of Vandenberg Air Force Base, California, on a Delta-II expendable launch vehicle. The Earth observing instrument on Landsat 7, the Enhanced Thematic Mapper Plus (ETM+), replicates the capabilities of the highly successful Thematic Mapper instruments on Landsats 4 and 5.
Landsat 7 is the most accurately calibrated Earth-observing satellite, i.e., its measurements are extremely accurate when compared to the same measurements made on the ground.  Landsat 7’s sensor has been called “the most stable, best characterized Earth observation instrument ever placed in orbit.”  Landsat 7’s rigorous calibration standards have made it the validation choice for many coarse-resolution sensors.
Considered a calibration-triumph, the Landsat 7 mission went flawlessly until May 2003 when a hardware component failure left wedge-shaped spaces of missing data on either side of Landsat 7’s images.