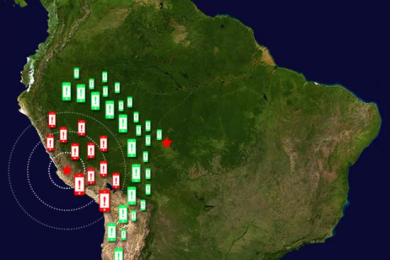 A study led by scientists at the U.S. Geological Survey (USGS) has shown smartphones and other personal electronic devices could be used as early warning systems for large earthquakes.

This technology would be especially useful for regions that cannot afford the high prices of conventional early warning systems. Despite being less accurate than scientific-grade equipment, the GPS (Global Positioning System) receivers in a smartphone can detect the permanent ground movement caused by fault motion in a large earthquake, according to USGS.

Crowdsourced observations from participating users are an essential part of the earthquake warning system. “Crowdsourced data are less precise, but for larger earthquakes that cause large shifts in the ground surface, they contain enough information to detect that an earthquake has occurred, information necessary for early warning,” said study co-author Susan Owen of NASA’s Jet Propulsion Laboratory, Pasadena, California.

This research was a collaboration among scientists from the USGS, California Institute of Technology (Caltech), the University of Houston, NASA’s Jet Propulsion Laboratory, and Carnegie Mellon University-Silicon Valley, and included support from the Gordon and Betty Moore Foundation. It was published on 10 April in the inaugural volume of the new AAAS journal Science Advances.