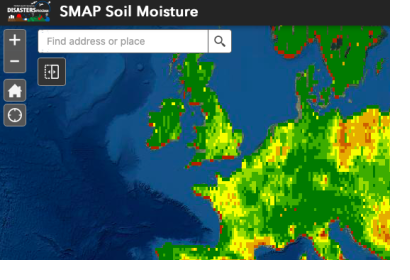 Officially launched in 2015 by the National Aeronautics and Space Administration (NASA), the SMAP mission is an orbiting satellite that measures the amount of wetness in the top layer of soil incrementally every 2-3 days. These Soil Moisture Active Passive (SMAP) measurements rely on radiation frequencies that point to different levels of moisture on the surface of  earth’s soil and are useful for scientists because it allows them to construct maps indicating the level of soil moisture globally. Acknowledging the relevance and usability of this data for the field of disaster management, NASA recently integrated the SMAP data into its Disasters Mapping Portal.

The Disasters Mapping Portal has been developed by the Geographic Informations Systems (GIS) Team at NASA in an effort to make their satellite data more accessible and user-friendly. The portal provides worldwide immediate and practical access to data and maps, which aid decision-making in disaster management support efforts. The recent integration of SMAP data adds another layer of valuable information to the portal. Significantly, SMAP data allows disaster management professionals to better mitigate the risks of natural hazards. This is particularly applicable for flood prediction and drought forecasting.

Conventionally, soil moisture is measured using sensors in the soil and by plugging this soil moisture data into computer models manually. This method lacks total accuracy, as soil moisture levels differ over short distances, single point calculations leave spaces in data and hard-to-reach areas are underrepresented.The SMAP satellite fills these gaps, offering holistic and reliable data on soil moisture using space-based information. Information on the use of SMAP data can be found in NASA’s official pre-launch handbook on the topic.

Data from the SMAP satellite proves useful in flood mapping as data captured from the SMAP satellite measures the levels of wetness in the top layer of soil. This data gives scientists the ability to identify wet areas and consequently draw conclusions on which regions are prone to flooding in case of hurricanes or heavy rainfall due to a potential saturation of the soil. In late August 2017, NASA made use of SMAP data to create surface flooding maps of Hurricane Harvey (below). The images show surface water conditions from SMAP captured on August 22 (left), before Hurricane Harvey’s landfall and on August 27 (right), two days after. The image on the right shows the increase of flooded areas from August 22 to August 27, 2017.

Likewise, data captured from the SMAP satellite gives scientists a more complete understanding of soil moisture levels for drought early warning. The data measured also allows for the ability to identify dry areas and consequently predict the development of droughts for particular regions. Meaningfully, the U.S. Department of Agriculture (USDA) incorporated SMAP data into its system to monitor and forecast the development of droughts on cropland (below). The image shows the development of a dry region from SMAP data in a hard-to-reach area captured on May 1-October 31 2016 (left) and May 1-Oct 31 2017 (right).

For disaster risk professionals, incorporating SMAP data into the Disasters Mapping Portal also has an incorporative value. Once accessed, end-users have the possibility to introduce their own data sets into the system. As an example, a disaster risk professional can use the SMAP data to pinpoint where a flood is likely to occur in the case of a hurricane and then integrate data of the most at-risk populations in the area. This build-up of information allows for a more comprehensive overview of the disaster and consequently a more efficient disaster management effort.

The integration of SMAP data into NASA’s Disasters Mapping Portal is helpful for disaster management professionals as soil moisture data is now immediately accessible to them in a user-friendly environment. Furthermore, this step consolidates the predictability of soil moisture data in mitigating the hazards of natural disasters with the incorporative value of the data in ensuring a more comprehensive overview of a disaster and will certainly lead to a more effective and successful disaster management effort henceforward.