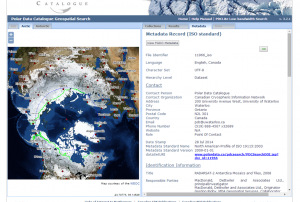 The Canadian Space Agency CSA in partnership with MacDonald, Dettwiler and Associates Ltd. MDA, and the Canadian Cryospheric Information Network (CCIN) at UWaterloo, have made public a mosaic of over 3,150 images collected by the RADARSAT-2 satellite. The images were captured with the Synthetic Aperture Radar aboard RADARSAT-2 in 2008 covering all of Antarctica.

The mosaic is now freely accessible to the public. “The mosaic provides an update on the ever-changing ice cover in this area that will be of great interest to climatologists, geologists, biologists and oceanographers,” said Professor Ellsworth LeDrew, director of the CCIN and a professor in the Faculty of Environment at Waterloo.

“The Polar Data Catalogue’s mandate is to make such information freely available to scientists, students and the public to enhance our… 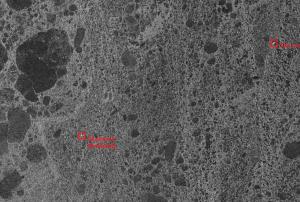 The Russian research vessel Akademik Shokalskiy was trapped for over a week in the Antarctic ice. High-resolution radar satellite data provided by the German Aerospace Center (DLR) helped to assess the conditions at the location and develop a rescue plan. In pack ice, conditions can change fast due to change in winds and air conditions. For this reason the German researchers used up-to-date, high-resolution images from the Earth Observation satellite TerraSAR-X, which they provided to the team of the trapped vessel and the rescue mission participants.

The DLR ground station analyzed the received images in near real time and provided them to the rescue center in Australia, one hour after receiving the images. Using the satellite images, the researchers were able to gather information about the thickness and properties of the ice surrounding the vessel. This helped to find appropriate ways for icebreakers to get to the trapped Akademik Shokalskiy. 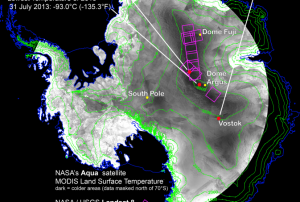 NASA's Landsat 8 satellite defined the coldest place on Earth - a high ridge in Antarctica on the East Antarctic Plateau where temperatures in several hollows can dip below minus 133.6 degrees Fahrenheit (minus 92 degrees Celsius) on a clear winter night.

Scientists from NASA evaluated 21 years’ worth of data, including the most detailed global surface temperature maps, developed with data from remote sensing satellites. They found that the temperatures were record low many times between Dome Argus and Dome Fuji, but the new record was set on 10 August 2010.

The launch of the new satellite Landsat 8 finally gave the researchers the sensor that allows them to investigate the area more precisely. For the analysis they used the Moderate Resolution Imaging Spectroradiometer (MODIS) instruments on NASA's Terra and Aqua satellites and the Advanced  Very High Resolution Radiometer (AVHRR) on several National Oceanic and Atmospheric Administration satellites. The… 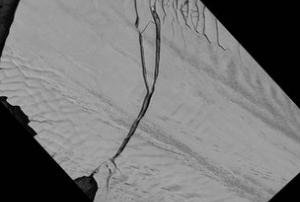 The DLR-operated TerraSAR-X Earth observation satellite has documented the gradual propagation of the first crack in the Pine Island Glacier (PIG) over a period of several months. PIG is the longest and fastest flowing glacier in the western Antarctic, flowing from the Hudson Mountains into the Amundsen Sea. The satellite data confirmed the crack's expansion to full width and the spawning of a new iceberg of the size of Hamburg, as a result of the fracture, as BBC news reported.

TerraSAR-X is in a near-polar orbit around the Earth, at an altitude of 514 kilometres. It carries a radar instrument that can detect the surface of the ice stream even in darkness. Using its active radar antenna, it is able to produce image data with a resolution of down to one metre, regardless of weather conditions, cloud cover or absence of daylight. 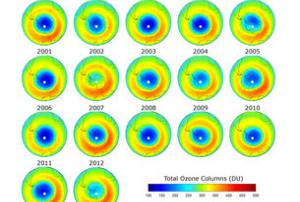 Satellites show that the recent ozone hole over Antarctica was the smallest seen in the past decade. Long-term observations also reveal that Earth’s ozone has been strengthening following international agreements to protect this vital layer of the atmosphere.

According to the ozone sensor on Europe’s MetOp weather satellite, the hole over Antarctica in 2012 was the smallest in the last 10 years. The instrument continues the long-term monitoring of atmospheric ozone started by its predecessors on the ERS-2 and Envisat satellites.

Since the beginning of the 1980s, an ozone hole has developed over Antarctica during the southern spring – September to November – resulting in a decrease in ozone concentration of up to 70%.

Ozone depletion is more extreme in Antarctica than at the North Pole because high wind speeds cause a fast-rotating vortex of cold air, leading to extremely low temperatures. Under these conditions, human-made chlorofluorocarbons – CFCs – have a…