This paper presents an overview of the research project “A Visual Analytics Approach to Understanding Poverty Assessment through Disaster Impacts in Africa” that is supported by the Global Pulse Rapid Impact and Vulnerability Analysis Fund (RIVAF) and at the time of this writing, is being implemented by UNOOSA and its partners.

The structure of the paper is as follows. First, I provide the broader context for the project by describing the UN Global Pulse initiative and the Rapid Impact and Vulnerability Analysis Fund (RIVAF) that has the broad goal of investigating the effects of the Global Economic Crisis on the poor and vulnerable. Next, I describe the specific aspects of the UNOOSA RIVAF project such as (a) partnerships (b) goals, and (c) case-study areas. This section is then followed by a brief discussion on the Vulnerability and Visual Analytics theoretical framework that is motivating the research. Instantiation of the Visual Analytics aspects of the theoretical framework is made in the next section through discussion on the Visual Analytic Globe, a prototype Visual Analytic environment being developed to support analytical aspects of the project. The paper concludes with a brief description of the next steps that will be taken in the project, relative to current project progress.

The Global Economic Crisis is considered to be the worst financial crisis since the Great Depression. The GEC has contributed to a decline in world-wide economic activity, large-scale unemployment, and major financial recovery efforts and commitments by governments. The complex and extensive nature of the GEC lead to the creation in December 2009 of the Rapid Impact and Vulnerability Analysis Fund (RIVAF) within the overall Global Pulse initiative. Specifically, RIVAF was established as a “grant-making mechanism (to) support innovative, real-time data collection and analysis to help develop a better understanding of how vulnerable populations cope with the impacts of global crises” . Fifteen applications were submitted to RIVAF, of which nine, included an application from UNOOSA, were selected. The following section provides an overview of the UNOOSA RIVAF project.

The broad objectives of the UNOOSA RIVAF project are to understand the particular effects that the Global Economic Crisis (GEC) has had on the well known relationships between livelihood, poverty, and vulnerability to natural disasters, and to understand how the impacts of natural disasters are potential indicators of GEC impacts on the poor and vulnerable. We hypothesize that the GEC has created a set of unique, previously unexamined circumstances that have negatively affected livelihoods, creating increased poverty conditions and subsequent increased vulnerability to natural disasters.

In particular, the UNOOSA RIVAF project seeks answer to questions such as:

It is a well-established fact that disasters reveal structural and institutional vulnerabilities, the depth and extent of which are not otherwise overtly apparent until the disaster occurs. For this question, we will investigate relationships between disaster impacts such as loss of agricultural lands, the effects of disaster impacts on livelihoods, and the subsequent effect of livelihood on poverty. A particular focus is being made on using a variety of indicators such as household poverty figures, import/export figures of key African commodities (cotton, palm oil etc.), global remittances, changing land use/land cover patterns, and economic and social disaster impact data to understand GEC impacts on the poor and vulnerable.

The UNOOSA RIVAF project is implemented in partnership with the UN Economic Commission for Africa, (UNECA), the UN Environment Programme (UNEP), and the Rochester Institute of Technology (RIT). The project teams’ multi-disciplinary mix of cross-UN-agencies coupled with an academic partner was designed to maximize the diversity of scientific- and agency perspectives that can be brought to bear upon the complex nature of the questions being investigated.

Two countries are considered in this project. The first is Burkina Faso (BF). BF is a very relevant choice as a focus area due to its economy being impacted by decreased cotton exports, high levels of internal and out-migration, and the widespread state of poverty. The second is Guatemala, another highly relevant focus area due to decreased coffee export prices and environmental degradation (i.e. deforestation) that has affected its economy. Both countries experience natural disasters regularly and thus can offer insights into the effects of the GEC on the relationships between livelihoods, poverty, and vulnerability as reflected in disaster impacts.

In the following sections we outline the theoretical framework underlying our efforts.

The relationships between livelihoods, poverty and vulnerability

We draw upon the Department for International Development’s (DFID) Sustainable Livelihoods Framework for examining the relationships between livelihoods, poverty and vulnerability (Chambers and Conway, 1992, Ashley and Carney, 1999).

In particular, according to the DFID framework, resources required to establish and sustain livelihoods are based on the concept of assets or capitals. A non-exhaustive list of capital examples include human capital, or knowledge, health and skills needed for working, natural capital, or natural resources related to livelihoods such as water, land and bio-diversity, financial capital such as cash and other financial resources, and social capital or social relationships and group memberships which people may draw upon for finding livelihoods (Frankenberger et al., 2002).

From the perspective of capitals, in theory, impoverished people are in an impoverished state because they cannot access or accumulate such capitals. We thus situate the notion of capitals within the context of the research questions of the UNOOSA RIVAF project using the following conceptual framework:

In order to support sense making of the three issues within our conceptual framework, we utilize Visual Analytics.

The complex and abstract nature of relationships between livelihood, poverty, and vulnerability to natural disasters requires discrete visual representations and computational processing that can support analytical reasoning and decision making to inform policy response, a scientific perspective know as Visual Analytics.

Visual Analytics is the science of analytical reasoning facilitated by interactive visual interfaces, computational methods, and knowledge construction, representation, and management strategies (Thomas and Cook, 2005, Pike et al., 2009). Visual Analytics makes a particular focus on assembling evidence, generating inferences and explanations from evidence, and comparing assessing those inferences and explanations (Pirolli and Card, 2005). The ultimate end goals of visual analytics investigations are the dissemination of results to decision makers and succinct communication of the interpretations made by an analyst or group of analysts (Gershon and Page, 2001)

The following section provides an overview of the Visual Analytic Globe, a prototype visual analytic environment being developed to provide support analysis of the impacts of the crisis on the poor and/or vulnerable through our research team’s emphasis on developing visually-oriented analytical products such as combined geographic map, timeline and data graph artifacts. Our emphasis on developing visually-oriented artifacts to present research results is theoretically motivated by calls within the United Nations community for the increased use of visualization for decision making (Office for the Coordination of Humanitarian Affairs (OCHA), 2008, Backhaus et al., 2010). 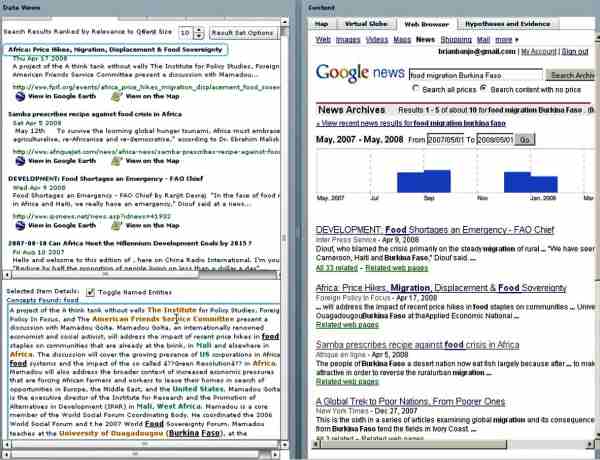 Figure 1: In this example, an analyst is querying Google News archives to find stories about food and migration in Burkina Faso between 2007 and 2008. The analyst can obtain details about any document by clicking on a document title and seeing the named entities that were identified in the raw text (as seen in the bottom left of Figure 1). The term “named entities” refers to people, places, and organizations found in the document, a color coding scheme is applied to support quick scans of the named entities. The color coding scheme used is as follows - people are highlighted in purple, organizations in orange, and places in green.

As the visual analytic globe processes each document, place names are extracted, geocoded, and mapped. The integrated map view enables an analyst to explore this derived spatial context through display of the geographic information derived from each document on the map (Figure 2). 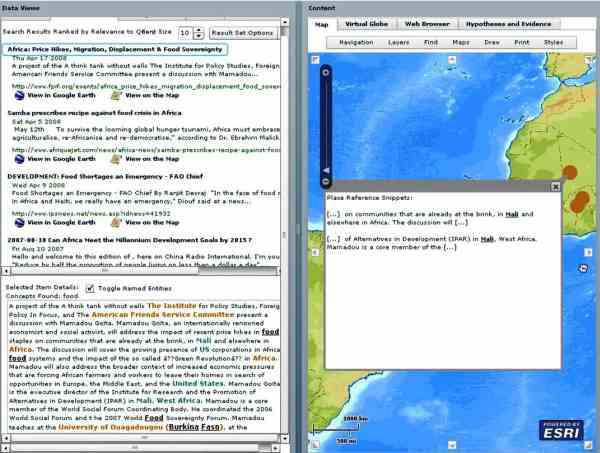 Another goal of the Visual Analytic Globe is to provide the analyst with multiple geospatial views, particularly space-based technology views. These multiple views come in the form of linked Geospatial and Space-based Technologies representations. The visual analytic globe accomplishes this by linking the virtual globe views of Google Earth with 2D Web Map Services (WMS) map images contained within ESRI-based map software (Figure 3). 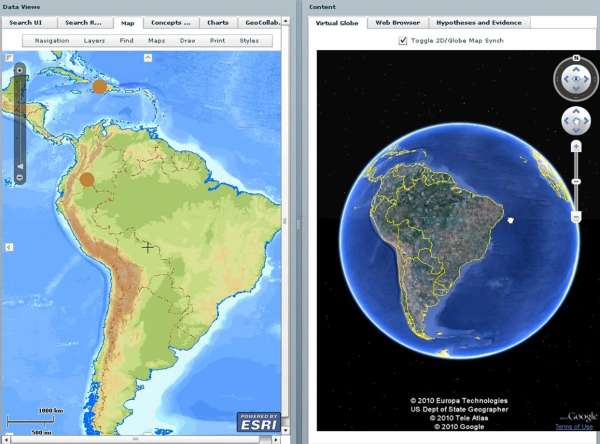 For more information on this aspect of the Visual Analytic Globe, see Tomaszewski (2008).

The visual analytic globe also integrated quantitative data views in the form of charts and other graphical data displays (Figure 4). 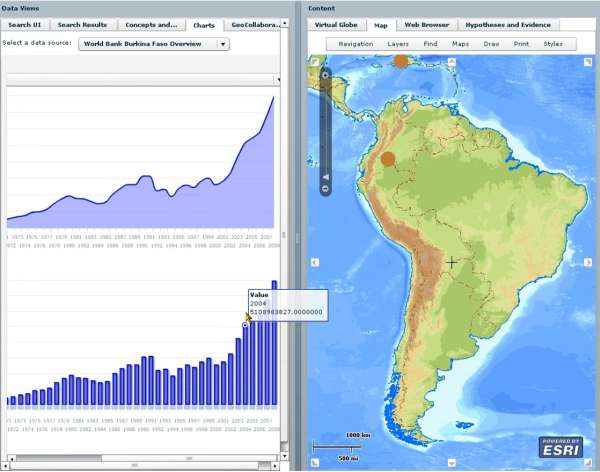 As seen on the left in Figure 4, an analyst has selected the Burkina Faso World Bank data set and examining different variables of interest.

For a full overview of the Visual Analytic Globe and all of its functionalities, see: http://www.youtube.com/watch?v=mo3fLuWHQnM&

The next steps for the UNOOSA RIVAF project are three-fold. First, a major task will be data collection from a wide variety of sources (public, private, NGO, and U.N. agencies) and in varying formats such as (a) geospatial datasets thematically relevant to the project, such as land-use land-cover, (b) satellite- and aerial imagery, (c) open source media analysis, (d) economic and employment statistics, and (d) any other data sets relevant to the project. The second step will be to conduct an extensive data analysis as motivated and informed by the conceptual framework discussed in section 3.1 and technologically supported by the Visual Analytic Globe discussed in section 4. Finally, our project team will develop final reports for submission to the RIVAF committee. In particular, the reports will present our final analysis of the questions discussed in section 2.1. We also hope to present a description of the methodology used on this project that is repeatable in countries other than our study areas. Ultimately, our intent is that our methodology can be re-purposed for future Global Pulse and other efforts aimed at understanding how disaster impacts can potentially reveal vulnerability, and in turn, alleviate human suffering. For future updates on this project, see: http://un-spider.org/rivaf/.