Monitoring and prediction of natural disasters in Kyrgyzstan

The Kyrgyz Republic is a disaster-prone country due to its geographical location in an active seismic zone and its mountainous landscape. Earthquakes, landslides, mudflows, avalanches etc. cause serious damage to both human life and country economy: earthquakes, landslides and floods are of special concern. Kyrgyzstan counts annually some 3,000 tremors and about 10-12 earthquakes, ten to hundreds landslides and around 60 glacier lake outburst. During the last decade space technology played a key role in contributing to the efficient mitigation of disasters. Earth observation satellites provide required geospatial data to support disaster response, monitoring activities and post-disaster damage assessment, and reconstruction, and rehabilitation. This paper describes the role of earth observations satellites on emergency observation, monitoring and assessment of disasters in Kyrgyzstan.

In Central Asia and particularly in Kyrgyzstan as in a mountainous region there have always been specific processes both of natural and anthropogenic origin which bear a threat to human lives and economic losses. Today they have all been well studied enabling us to use effective organizational and engineering solutions for their prevention and reduction of a negative impact.

The most dangerous hazard is an earthquake which causes possible great human life and economic losses. This hazard has a stochastic character both in time and space and can be predicted only with certain probability therefore a permanent readiness to its occurrence is essential. Risk degree is connected directly with the quality and earthquake-proof of living and social and infrastructure constructions. This is the most vulnerable aspect in our region and therefore we need to place high emphasis on it. Today in CAIAG we are working on a program in expanding the automatic seismic stations network and in the near future we will start working on precision of the cities seismic microzoning which can afford to more fairly assess possible damages of different types of constructions in different engineering and geological conditions and to rationally plan preventive risk reducing measures.

Earth remote sensing methods are very efficient for improving the understanding of the temporal and spatial evolution tendencies of these phenomena and allows, together with ground methods, to more effectively define parameters of the considered processes. This is a key research direction of CAIAG where we use GPS survey, radar and multi-sensor measurements data interpretation to solve tasks of natural objects monitoring and determining their evolution features and the automatic weather stations, hydro and seismic stations which will allow to predict main climatic, hydrologic, glaciological and seismological mechanisms of the region.

Landslides, floods, mud-flows, outburst of glacial lakes, avalanches, ground water flooding, land erosion and salinization are the next by the risk degree considering their spatial expansion. Although these processes have a stochastic character they have exact enough spatial localization that allows us to define areas of possible impact and to undertake preventive measures. The natural hazards distribution map (Fig. 1) gives an overview on natural disasters in Kyrgyzstan. In the first nine months of 2010 there have been 142 floods, 60 landslides, 41 snow avalanches and 13 earthquakes. 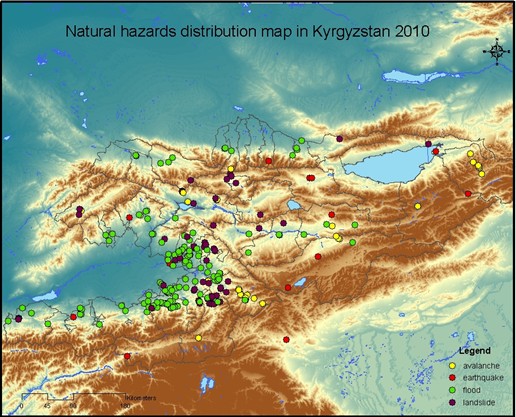 With the progress in modern technology it has become possible to monitor natural disasters using satellite data. One of the promising initiatives the Sentinel Asia initiative. Sentinel Asia is a voluntary basis initiative led by the APRSAF (Asia-Pacific Regional Space Agency Forum) to support disaster management activity in the Asia-Pacific region by applying the WEB-GIS technology and space based technology, such as earth observation satellites data.

On March 12, 2010 there was a flood in Kazakhstan due to break of the dam at Kyzyl-Agash village. The death toll from the flood was 34 and thousands were evacuated as informed by the Ministry of Emergencies. Spring flooding is frequently occurs in Central Asia but a sudden rise in temperatures following weeks of heavy snow storms has exacerbated the problem this year (Fig.2).

Disaster area maps were created by visual interpretation from ALOS data together with topographic maps (scale 1:100 000) and information from Ministry of Emergency Situations. The flooding zone of the Balhash sea area is 2 604 square kilometres and Kyzyl Agash flood area is 1 128 square kilometres. 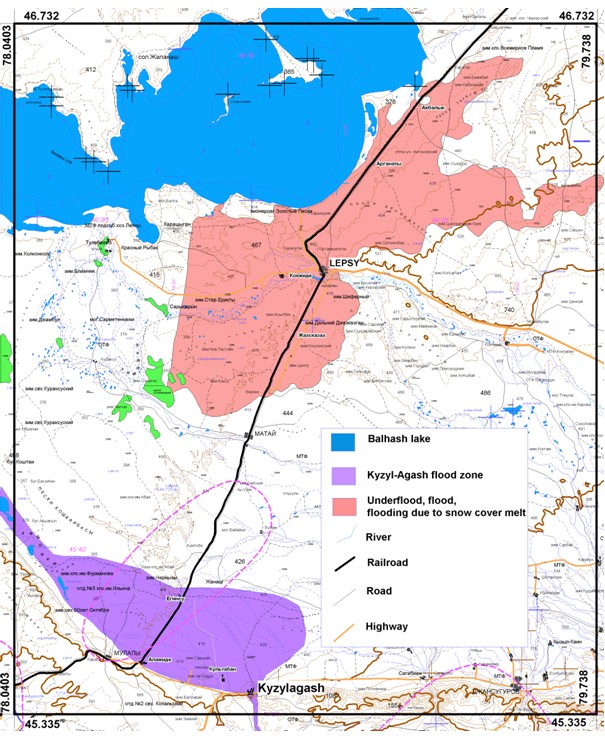 ALOS data were used in a project during 2009-2010 supported by Japan Aerospace Exploration Agency (JAXA). The study was on deformation in the Pamir-Alai area for Nura 2008 earthquake with potential use of ALOS satellite data (Fig.3 and Fig.4). Figure 4 shows first preliminary results on using Radar Interferometry techniques in order to define surface deformations for Nura and Kochkor earthquakes. 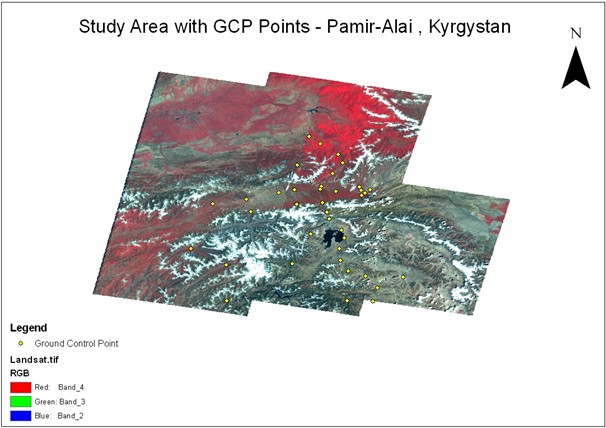 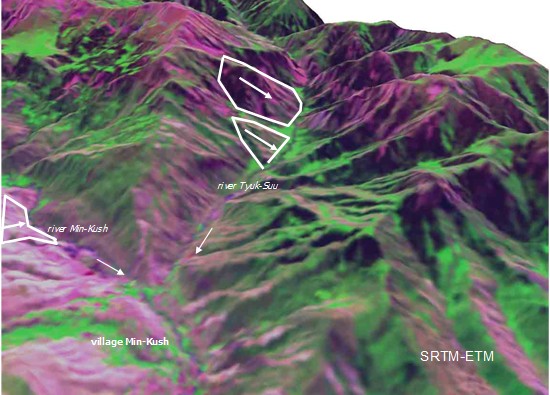 Active landslides are a special concern which CAIAG monitors in cooperation with the MES. One the active landslide is the Min-Kush which is located next to radioactive tailing. In 2004 deep cracks were formed with the land subsidence in underlying gully and later that year the amplitude of vertical removal along cracks up to 1 m on the upper platform and up to up to 0,3 m along northern border, with extension not less than 200 m sub-parallel to general falling of slope were observed (Fig.5). In 2007 new cracks were formed. GPS monitoring has proven to be efficient to monitor the landslide area.

The main peculiarity of all the processes considered above is their stochastic character caused by the specificity of the objects–factors interaction in the geospheres conditions. A practical possibility of the precise forecast is impossible due to the stochastic character of the negative processes evolution and the probabilistic assessment allows only defining of risk degree and problematic when it concerns human lives. There is no ample risk reduction strategy choice in this situation. One of the evident strategies is a strategy of adaptation when we use data of the negative processes impact area and avoid it or minimize our activities in its bounds. And the second is the strategy of the engineering protection. All the other strategies like, for example, creation of early warning system for increase of population awareness of dangerous processes reduce risks to a slight degree.

The main obstacle in Central Asia for the efficient realization of minor strategies listed above is the lack of financial resources.

Although there is no opportunity to quickly and fully accomplish these strategies we at least need to constantly understand their importance in the current economic activity. And a strong government control is necessary over the implementation of these measures as only the government makes resources available for it and in case of the strategy non-observance and disaster occurrence the main expenses burden is incumbent on it.

This paper undoubtedly refers to the anthropogenic risk component as there is an opportunity of monitoring and creation of risk control here. The practice shows that preventive actions in the anthropogenic component field reduce risks much and cost much cheaper than clean-up operations of short-sighted and ignorant economic activity. The notorious examples of ecological disasters mainly connected with human activity are the dehydration of Aral Sea basin, uranium and rare-earth production dump-tail problem and soil degradation and desertification.

Regarding changes due to climate change it can be said undoubtedly that it is occurring presently and will occur in the future. These changes are different and will always have both positive and negative components. Today we are a witness of global warming with all its accompanying negative consequences but being aware of secular cyclic recurrence of the temperature motion and disposing data of paleoclimate reconstruction we can imagibe a global chill. Periods of these changes as well as amplitudes of climate parameters irregular due to the mentioned above stochastic nature of all the planetary processes and the precise forecast here is unachievable in principle. Therefore we must be ready to resist, regardless of climate tendencies direction and its rate, building our technological and energy capacity – there is no other way. And obviously our progress will be more impressive if we join efforts and resources.