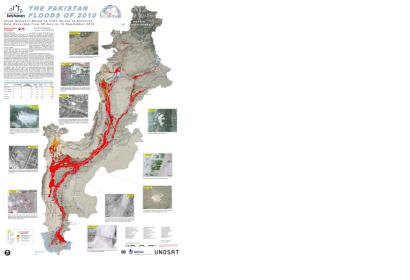 On 18 September 2012, the International Charter: Space and Major Disasters was activated for floods in Pakistan. Torrential rain, which began on 5 September, had caused flash floods in Pakistan leaving an estimated one million people homeless. Over 100 people have been reported killed in the floods, and many homes and properties have been inundated. Agriculture has also suffered due to the flood waters, washing away crops and livestock. Relief efforts are under-way, but local efforts are hard-pressed to cope with the scale of the floods. Among the districts affected are: Dera Ghazi Khan, Ghotki, Jaffarabad, Jacobabad, Kashmore, Muzzaffagarh, Nasirabad, Rajanpur, Rahim Yar Khan and Shikarpur. The Charter was activated UNITAR/UNOSAT on behalf of UNPD.