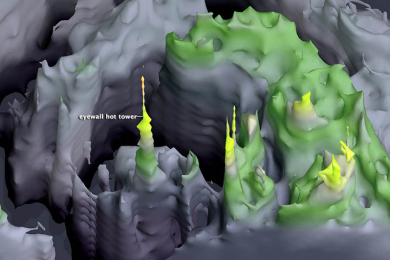 Two hours before Hurricane Isaac made landfall on 28 August 2012, a satellite orbiting hundreds of miles above the storm used a radar instrument to map its inner structure. The instrument on the Tropical Rainfall Measuring Mission (TRMM) observed two extremely tall complexes of thunderheads called hot towers in the eyewall, a sign that the storm was strengthening. The towering thunderheads were so high that they punched past the troposphere (the lowest layer of the atmosphere where most weather occurs) and sent water vapor rushing into the stratosphere, a higher layer that normally contains very little moisture. It was TRMM that first confirmed the existence of hot towers on August 22, 1998, after observing a column of intense rainfall within Hurricane Bonnie that rose to 18,000 meters - twice the height of Mt. Everest.