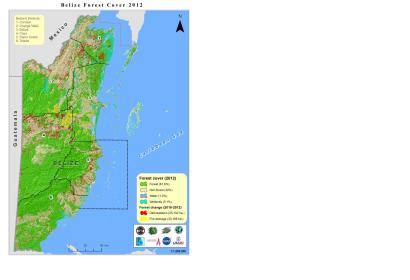 UN-SPIDER's Regional Support Office CATHALAC (Water Center for the Humid Tropics of Latin America and the Caribbean) has just developed the first version of a 2012 forest cover map of Belize. This research was carried out in collaboration with the Ministry of Forestry, Fisheries, and Sustainable Development of the Government of Belize, Lancaster University of the UK and the Environmental Research Institute of the University of Belize. The work – now pending field validation – was developed using NASA Landsat-7 imagery, and follows on the heels of an earlier 2010 USAID- and NASA-supported study assessing changes in forest cover in Belize over the period of 1980-2010. The current study indicates that Belize's forest cover declined from 62.8% in early 2010 to approximately 61.6% in early 2012. A technical report detailing the assessment's methodology and major findings will be released shortly.