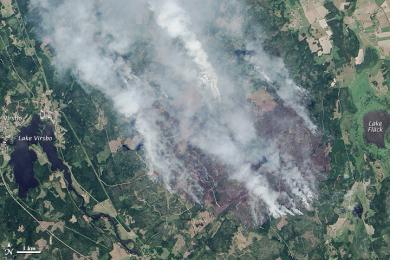 Sweden is not a country typically known for its summer wildfires. Fires occur regularly, but not in the intesity of this year's blaze that has been affecting the region of Västmanland since 31 July 2014.

The fire grew to the largest one in 40 years. It has affected more than 150 square kilometers, killed one person and forced thousands to evacuate.

NASA's Operational Land Imager (OLI) onboard the Landsat 8 satellite captured an image of the fires from Space. On the natural color image, burnt areas appear brown while unaffected areas are dark green, light green or tan.

OLI measures in the visible, near infrared, and short wave infrared portions of the spectrum. Its images have 15-meter (49 ft.) panchromatic and 30-meter multi-spectral spatial resolutions along a 185 km (115 miles) wide swath.