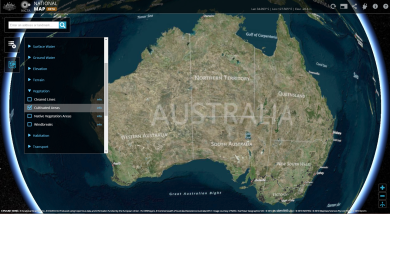 The federal government of Australia has launched the National Map, an online platform visualizing a number of the data sets released by the government.

This online map of Australia allows users to overlay geospatial datasets. It is a collaborative effort between the Department of Communications, National ICT Australia (NICTA) and Geoscience Australia, and includes data sets released by the government under the open data policy, including from the Australian Bureau of Statistics data, Bureau of Meteorology data, and data sets from data.gov.au. The datasets include terrain, vegetation, utilities, infrastructure, water, habitation and boundaries and data broadband quality and availability.

A range of open source software and frameworks has been used for the map, including Cesium, Leaflet, Geoserver, jquery, URI.js, proj4js, html2canvas, knockout, esri-leaflet.js, togeojson, and Tilelayer.Bing.js.

"This is the year we are seeing the Australian government recognize the value of open data and the real benefits to the Australian people," co-coordinator Pia Waugh said in a statement.

The National Map tool will be one part of the GovHack 2014 competition this week that will open up government datasets to developers to create apps and data visualizations.