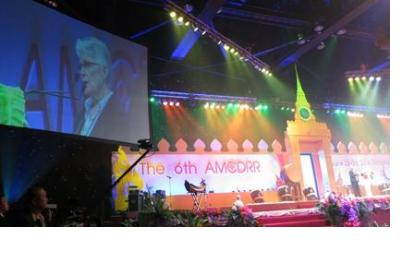 Recognizing the achievements of the 2005-2015 Hyogo Framework for Action (HFA) and development of the post 2015 framework for disaster risk reduction (HFA2), members of the Delegations attending the Sixth Asian Ministerial Conference of Disaster Risk Reduction (AMCDRR) issued a declaration to governments and stakeholders in Asia and the Pacific.

In the Bangkok Declaration, the Delegations call for governments and stakeholders to enhance resilience at the local level, improve spending and investment in Disaster and climate risk management, encourage a shift in the private sector from response oriented practices to a prevention mindset, promote innovation, science, and technology, improve the transparency of and accountability of governance, and build coherence between the framework and processes for sustainable development and climate change.

The UN Secretary-General for Disaster Risk Reduction Margareta Wahlström stated that, “A consensus is emerging that reflects a real determination and sense of strong direction to Sendai and way beyond and this is the most important thing to come out of this Conference… It is clear that Asia Pacific – as always – is leading the way in forging a more ambitious future vision for disaster risk reduction efforts. The Declaration’s recommendations on the importance of local resilience, disaster risk-sensitive public investments, more vibrant public-private partnership, and the vital role of science in providing important and understandable risk information to communities are very encouraging.”