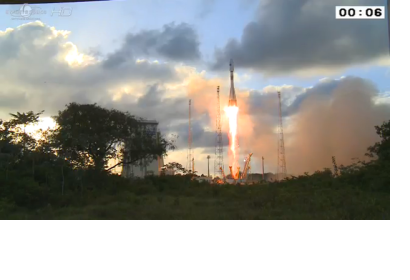 ESA has successfully launched the first satellite for the Copernicus program – Sentinel 1. The 2.3 tonne satellite lifted off on a Soyuz rocket from Europe’s Spaceport in Kourou, French Guiana at 21:02 GMT.

The Sentinel 1 Synthetic Aperture Radar (SAR) instrument will scan the Earth’s surface in all weather conditions day and night. It will be used mainly for environmental monitoring in Europe, Canada and the polar regions. The maritime monitoring applications include ice and ship monitoring, as well as support for oil pollution detection and tracking. The satellite sensors will also be able to determine the direction, length and height of waves.  In monitoring the land surface of the planet the satellite will be used to support forest management and deforestation monitoring. Satellite data and images will also be used to create agricultural maps to monitor production and productivity. This feature is especially important for efforts in areas with food security problems.

Another important application of Sentinel 1 will be in emergency management. The satellite will support flood, landslide and volcano monitoring. Furthermore the data will be used to create high-resolution maps of earthquake prone areas, and so enhance risk assessment and disaster preparedness.

Sentinel-1A together with Sentinel-1B, which is due to be launched in 2015, will provide imagery of land and ocean surfaces of Europe, Canada and the polar regions in near‑real time. Data from the Sentinel satellites will be provided on a free and open basis.