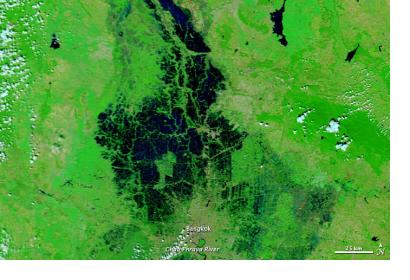 By late November 2011, floods were receding around Thailand’s capital city of Bangkok, but only slowly. These images from the Moderate Resolution Imaging Spectroradiometer (MODIS) on NASA’s Terra satellite compare conditions around the city on November 28, 2011 (top), and November 1, 2011 (bottom).

These images use a combination of visible and infrared light to better distinguish between water and land. Water is navy blue. Vegetation is bright green. Bare ground and urban areas are earth-toned. Clouds are pale blue-green.

Both images show significant flooding, but flood waters have receded over the course of the month. Lower water levels are especially apparent east of the city.

Although flood conditions had improved in some areas by late November, many residents of Bangkok suburbs continued to cope with standing water, according to news reports. As flood waters retreated from some areas, Bangkok-area residents discovered unwelcome squatters: crocodiles and poisonous snakes, USA Today reported.