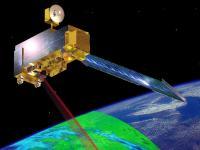 Terra explores the connections between Earth's atmosphere, land, snow and ice, ocean, and energy balance to understand Earth's climate and climate change and to map the impact of human activity and natural disasters on communities and ecosystems. It was launched on 18 December 1999 and has far exceeded its design life, having a strong chance of operating successfullty into the early 2020s.
Terra is in a circular sun-synchronous polar orbit that takes it from north to south (on the daylight side of the Earth) every 99 minutes.

Approximately the size of a small school bus, the Terra satellite carries five instruments that take coincident measurements of the Earth system.

Instruments:
Advanced Spaceborne Thermal Emission and Reflection Radiometer (ASTER): Creates high resolution images of water, ice, clouds and the land surface using Shortwave Infrared (SWIR); Thermal Infrared (TIR); and Visible and Near Infrared (VNIR).
Clouds and Earth's Radiant Energy System (CERES): Experimental instrument which measures the Earth's radiation and provide cloud property estimates than enables scientists to assess clouds' roles in radiative fluxes from the surface to the top of the atmosphere.
Multi-angle Imaging Spectroradiometer (MISR): Instrument that measures the intesnity of solar radiation reflected by the Earth system.
Measurements of Pollution in the Troposphere (MOPITT): Instrument that monitors changes in pollution patterns and its effect in the lower atmosphere of the Earth.
Moderate Resolution Imaging Spectroradiometer (MODIS): Acquires data on the complete Earth's land surface ever 1-2 days.