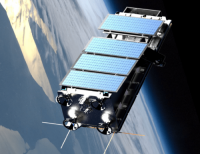 NovaSAR-1 was launched into orbit on September 16, 2018 from Satish Dhawan Space Centre in Sriharikota, India. It was developed by the United Kingdom Space Agency (UKSA) in cooperation with the Indian Space Research Organisation (ISRO), the Commonwealth Scientific and Industrial Research Organisation (CSIRO) and the Department of Science and Technology-Advanced Science and Technology Institute (DOST-ASTI) of the Republic of the Philipines. NovaSAR-1 orbits at 583 km above the earth's surface and is fitted with a Synthetic Aperture Radar (SAR) sensor that makes use of microwaves in the electromagnetic S-band. The spatial resolution of its imagery ranges between 6 and 30 metres. The data collected by NovaSAR-1 helps monitor climatological disasters (forest fires and droughts) and hydrological disasters (floods).