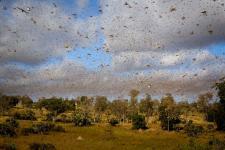 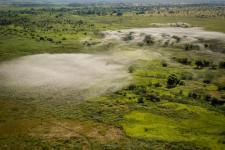 Desert locust is the world’s most dangerous and destructive migratory pest (Cressman et al., 2016; Lazar et al., 2016). They are highly voracious, as a single adult locust can consume vegetation equivalent to its own weight (approximately 2 grams) in a day (Latchininsky et al., 2016). Locust swarms are highly mobile and can fly across continents and destroy entire livelihoods in less than six hours, with adult swarms flying about 150km daily. A small (1km2) size swarm (approx. 40 million locusts) can demolish the equivalent amount food that 35,000 people would eat in a day (Cressman et al., 2016). During the plague in 2003-2005 in West Africa, 100, 90 and 85 per cent losses on cereals, legumes and pastures respectively were recorded, affecting more that 8 million people (Renier et al., 2015; Brader et al., 2006). Due to desert locusts’ trans-boundary nature they require trans-boundary coordination and intervention to deal with.

eLocust3 is recording and transmission system for locust data, consisting of a tablet and custom software to collect data and transmit it via satellite in real time to ground monitoring centers. It has a satellite image viewing and navigation feature that helps with location pinpointing. The data transmitted is the basis for all early warning, forecasting and prevention efforts by relevant authorities on the ground.

Some of the data collected include locust type, vegetation species, habitat type and treatment and safety precautions during control. After transmission to the locust control center, the data is used in combination with rainfall and green vegetation data from satellite imagery, historical records or other data sources and locust development and trajectory models to analyze the spread of the pest. These analyses are done in the RAMSES and SWARMS GIS platforms.

Reconnaissance and Monitoring System of the Environment of Schistocerca (RAMSESv4 (2015)

This is a custom GIS platform developed by FAO to be used by locust affected countries to analyze and manage locust, ecology, satellite imagery and other data (data received from the eLocust3 system). It is fitted with a database and GIS for this purpose. It uses open source GIS software OpenJump and PostGISPostgresSQL spatial database. National locust teams can use the system to create locust distribution maps that can be used to inform intervention strategies. The system is also used to transmit the data to the FAO headquarters for more analysis and storage.

While RAMSES is useful for local/national locust monitoring SWARMS is a platform used to integrate, overlay, display, compare and map all relevant datasets for locust forecasting at the international level. Both vector data, such as roads and administrative boundaries, and raster data, such as MODIS imagery and rainfall estimates, are combined to help better understand the spatial relationship between infestations and the local environment (Cressman, 2013). SWARMS holds historical data since 1929 to date. 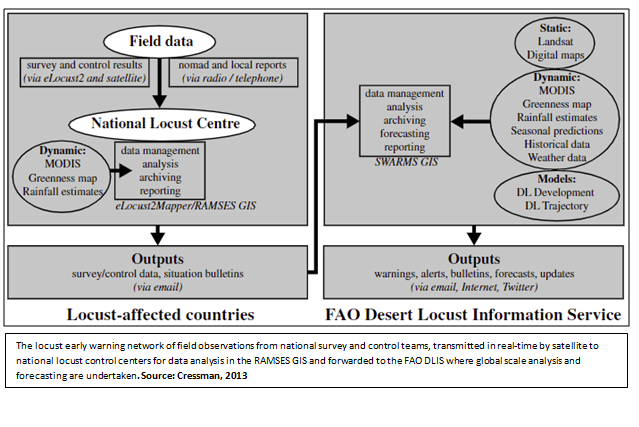 This is a geospatial decision support model using locust development, gregarization and biotope variables to determine locust presence and location in a timely manner. This tool is set to employ the use of satellite data such as Landsat 8, MODIS, Sentinel, SRTM, CHIRPS and ASTER, among others. The tool is currently under development by SERVIR/NASA together with other regional partners.  Click here for more details. 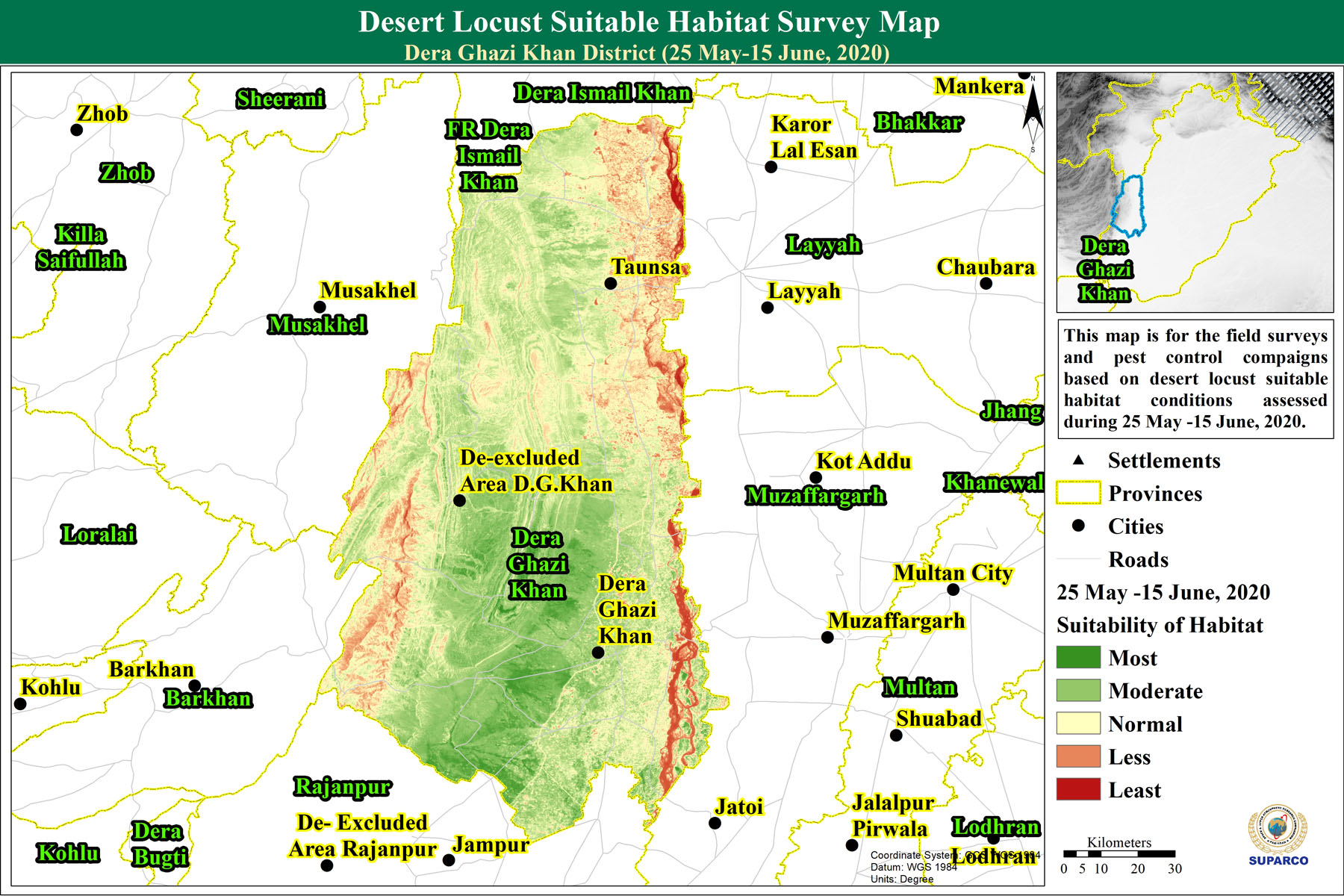 The Space Application Centre for Response in Emergency and Disasters (SACRED) of the Space & Upper Atmosphere Research Commission of Pakistan (SUPARCO), a UN-SPIDER Regional Support Office, is using space-based information to analyze areas with regards to their suitability as desert locust habitats. The maps resulting from this analysis indicate the suitability of habitat on a scale consisting of five values: least, less, normal, moderate and most. The maps are published online for download, and a related layer is produced and made available through the DisasterWatch Desert Locust Situation Alert geoviewer.

Commission for controlling the Desert locust in Northwest Africa

Commission for controlling the Desert Locust in the Western Region

Commission for controlling the Desert Locust in the Central Region

Commission for controlling the Desert Locust in Southwest Asia

Pesticide use can increase chances of locust invasion and at the same time can be used to control locust infestation. In both cases, it has a negative environmental implication.

Scattered solitaries locusts breed in winter, spring and summer. With heavy rainfall in a seasonal breeding ground, the locusts can gregarize (organize into large swarms) and cause a plague, unless controlled by drought, their migration to unfavorable habitat or use of pesticides (Adriaansen et al., 2016).

With climate change affecting habitats differently, it is not yet know how the desert locust will adapt, given that it is an agile insect known to have survived difficult conditions. Alterations to its normal behavior and physique are possible (Cressman, 2013).