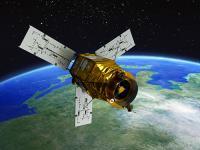 KOMPSAT-3A is the world’s first civilian satellite that is equipped with a high-resolution, infrared(MWIR) sensor which enables nighttime observation. It also provides the optical images with high resolution of 50 cm or less for the second in the world following the US.
The technology of improving the optical image quality by 30% or more without degradation using diagonal data to provide 38-cm-class images was developed for the second following the EU.
The high-resolution electro-optical spaceborne camera AEISS-A(Advanced Earth Imaging Sensor System-A) developed by KARI and accommodated on KOMPSAT-3A platform features 50cm class optical photography, which marks the highest resolution among cameras mounted on domestic satellites. The IR sensor, which is capable of detecting heat on the ground, is used to observe fire, volcanic activity and urban thermal islands during nighttime, even under any weather conditions.
KOMPSAT-3A operates in the sun’s synchronous orbit at an altitude of 528km and passes over Korea twice(day and night), photographing the Korean Peninsula for up to 50 minutes each day.
The spacecraft bus of KOMPSAT-3A was developed by a private enterprise, while KARI transferred the technology to expand the domestic satellite industrial base.