Data Application of the Month: Overview of Web Maps for Flood Monitoring

Since its creation, UN-SPIDER's data base on satellite data and products has gathered links and information to more than 250 data sources related to space-based disaster risk reduction and emergency response. These include many links to free satellite data as well as final analysis products such as hazard maps. Flood prediction, near real-time monitoring, risk assessments and damage assessments can all benefit from satellite data and are often also supported by in situ data and physical models. Yet, the diverse supporting data available matched with the various needs of authorities, first responders or researchers make it difficult to be aware of all the information available. To gain an overview we present several easily accessible and interactive web mapping tools that shed light on disaster management for floods from various perspectives. To find more data sources related to floods and other hazards, visit the data sources section of the Knowledge Portal.

The Global Flood Awareness System (GloFAS) belongs to Copernicus' Emergency Management Service and was developed jointly by the European Commission and the European Centre for Medium-Range Weather Forecasts (ECMWF). Fully operational since April 2018, the web platform visualizes forecast products at 0.1° or ~11km resolution based on real-time weather forecasts and historical observations that enter a GIS-based spatially distributed hydrological model. 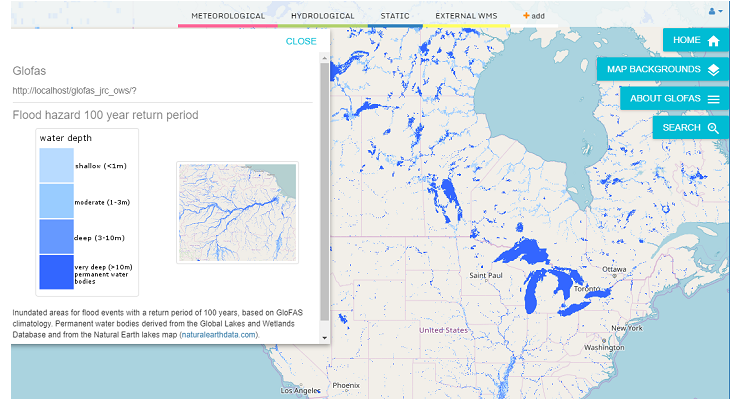 The Dartmouth Flood Observatory was founded in 1993 at Dartmouth College, Hanover, NH USA and moved to the University of Colorado, INSTAAR, CSDMS in 2010. It's funding is supported by NASA and the European Commission, through the Global Disaster Alert and Coordination System (GDACS) project, Joint Research Centre, Ispra, Italy. The observatory follows the mission of: conducting global remote sensing-based fresh water measurement and mapping in “near real time” as well as recording such information in a permanent archive. The Dartmouth Flood Observatory inundation maps are based on optical satellite imagery (MODIS Terra and Aqua). Individual map tiles that are updated daily are available to show currently-observed flooding (over the past 14 days to remove cloud obscuration). Where of use, Sentinel-1 radar images are also utilized.

Similar to the DFO maps, NASA's near real-time Global Flood Map product is based on optical satellite imagery (MODIS Terra and Aqua). In fact NRT Global Flood Mapping builds on the DFO's efforts in order to map floodwater extent in detail for active floods. NASA's website provides links and information about the automated daily flood and surface water products produced at NASA Goddard.

Developed by the UNEP in Partnership with the International Water Association and the DHI Water & Environment and 10 water authorities across six countries, the Flood and Drought Portal provides near real-time access to hydrographic, meteorological and demographic information. 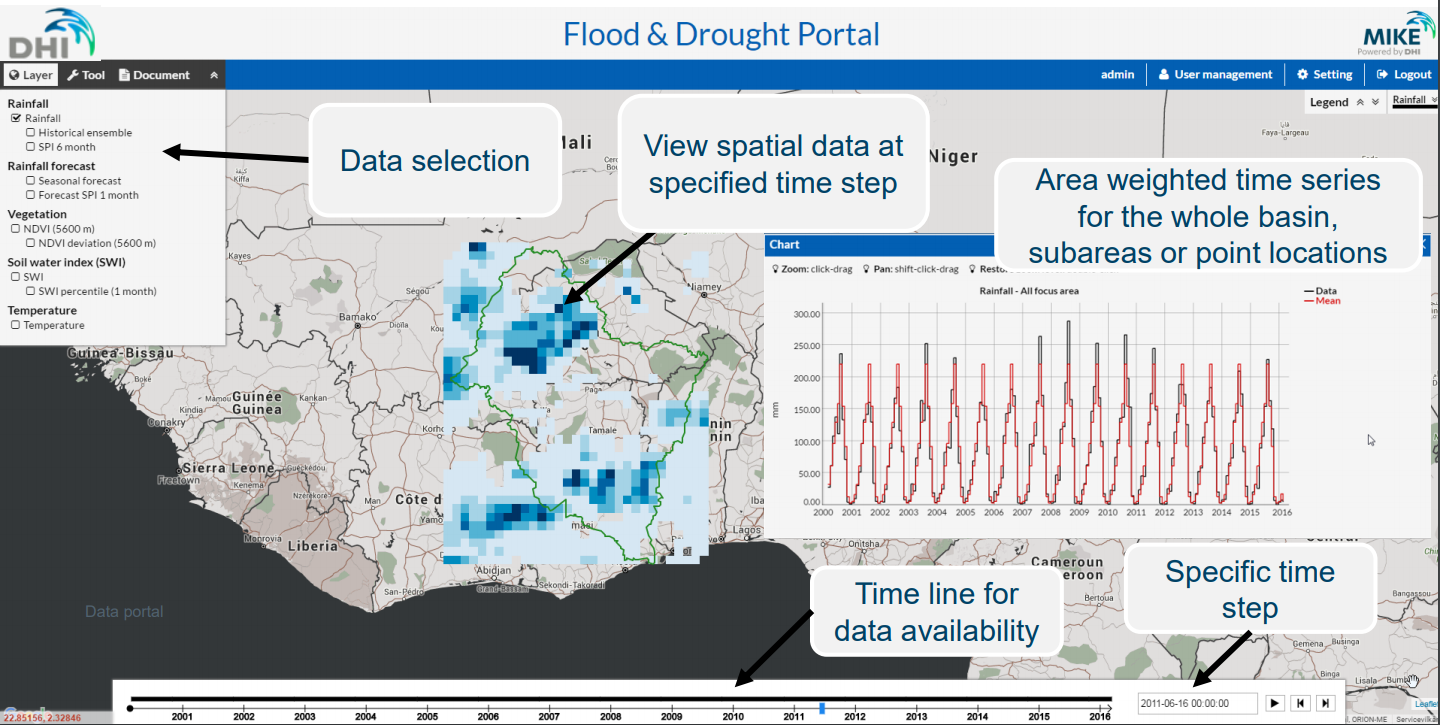 The Database for Hydrological Time Series of Inland Waters analyzes satellite data from Envisat, Jason-2 and Sentinel 3 to create time series of water levels in inland waters. Provided by the TU Munich, an interactive web map displays target water bodies that are or were covered by the orbit of the satellites above. Most time-series start at 2008 with some continuing through until 2018. The recent change to Sentinel-3 means that not all locations are available yet, but the researchers are open to requests if a satellite is available today for certain target. The methodology is described in more detail here. 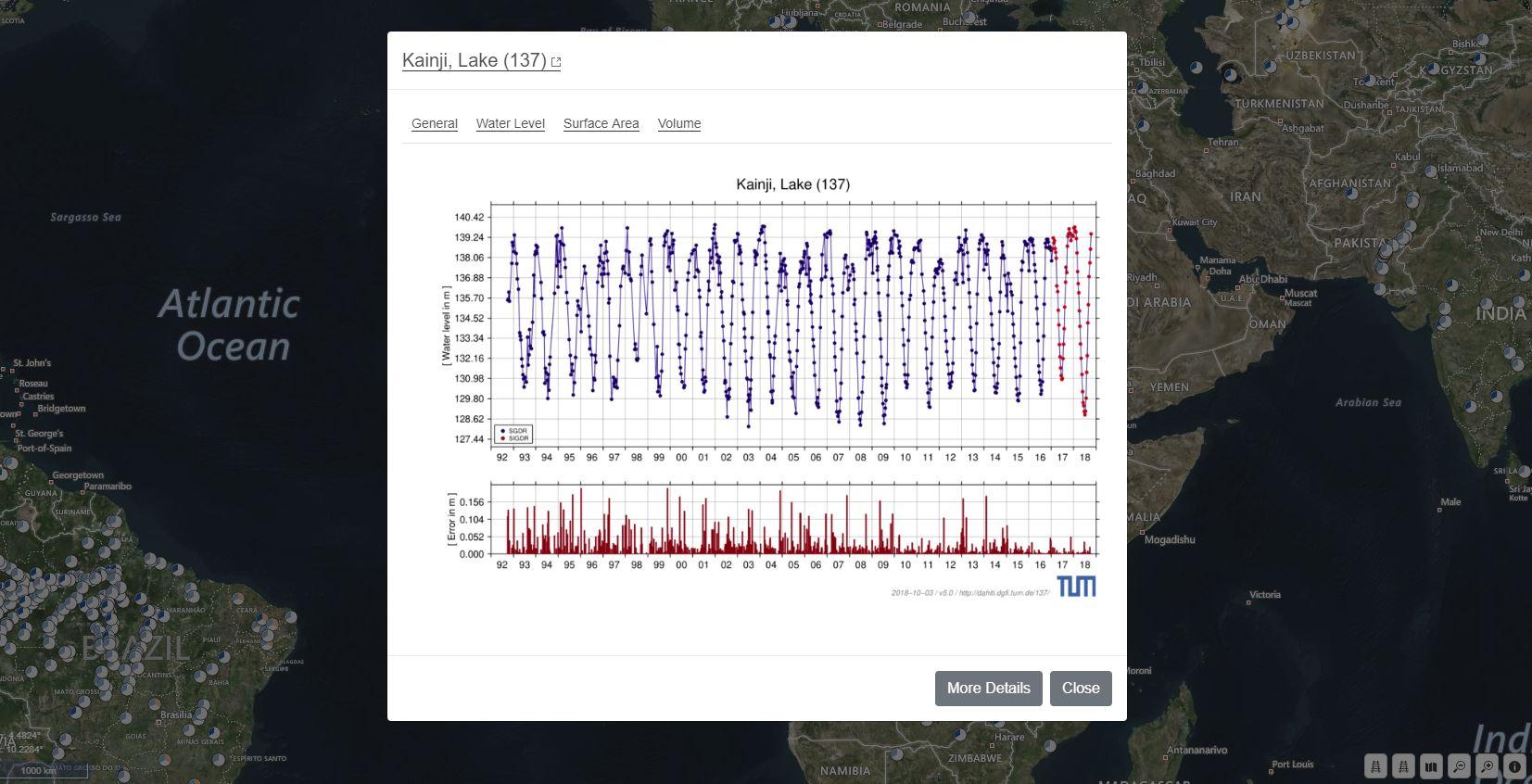 Another web map presenting data on reservoir heights is the Global Reservoir and Lake Elevation Database (G-REALM). Updated products are delivered within 7-10 days after satellite overpass. In contrast to DAHITI, graphs presented on G-REALM do not give absolute height but illustrate height variations. 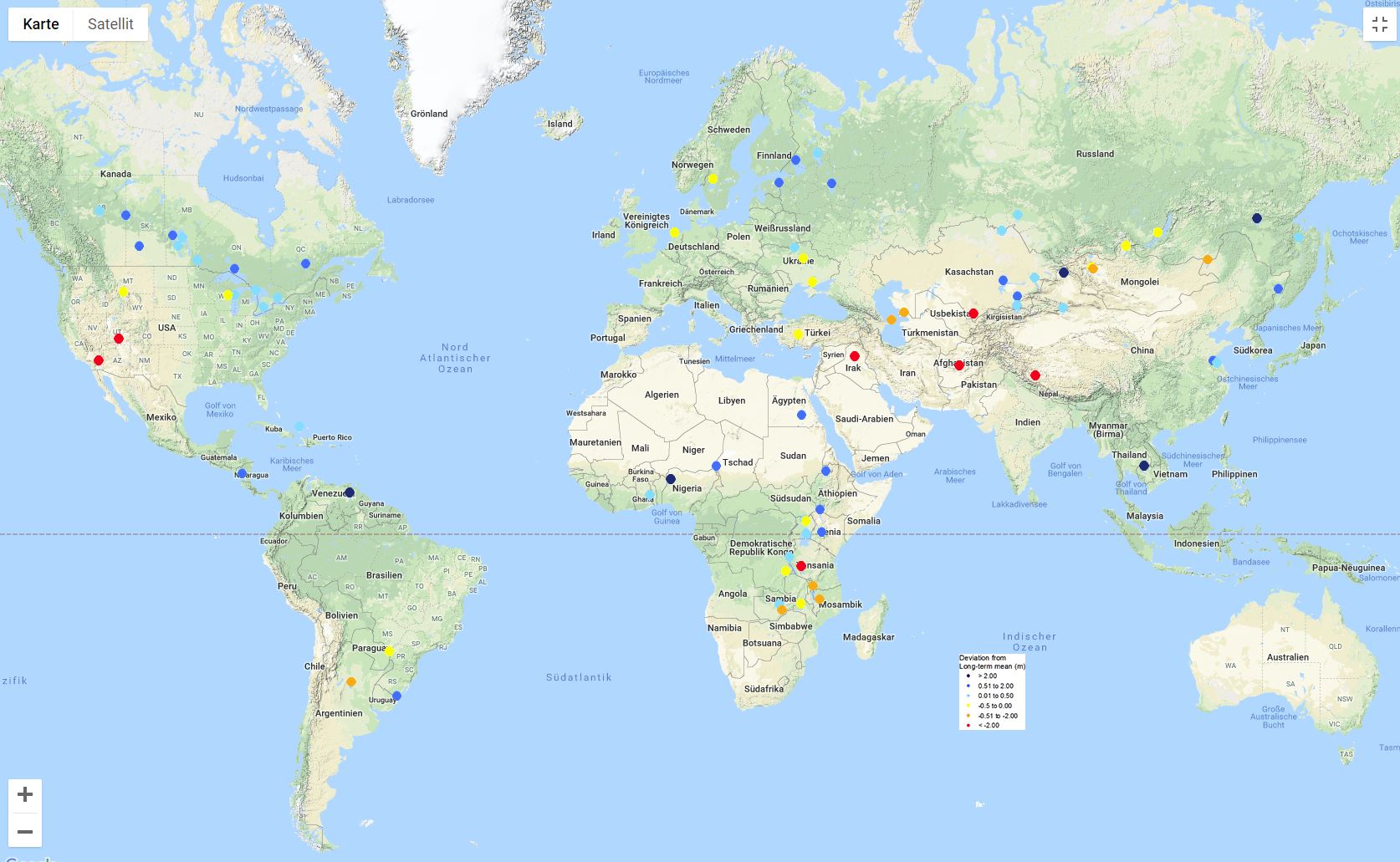 Accessible only to partners of EFAS: The European Floods Awareness System (EFAS) is providing flood forecasts to national and/or regional authorities responsible for flood forecasting. EFAS is the forerunner of GloFAS but also running parallelel. EFAS only makes data available to national, regional or local authorities that are legally obliged to provide flood forecasting services or have a national role in flood risk management within their country. EFAS forecasts are provided for free and are not limited to EU Member States only.Partners

EFAS map visualizes flows at points of interest in excess alert levels. With the EFAS Severe Alert Level (SAL) corresponding to a simulated flood event with a return period of >20 years are indicated in purple, flows in excess of the EFAS High Alert Level (HAL) in red and flows in excess of the Medium Alert Level in yellow. Thereafter, numbers in the subsequent rows indicate the number of EFAS ensemble members produced using the ECMWF ensemble (EUE) and the COSMO-LEPS limited area ensemble (COS) that exceed the HAL and Severe Alert Levels (SAL). 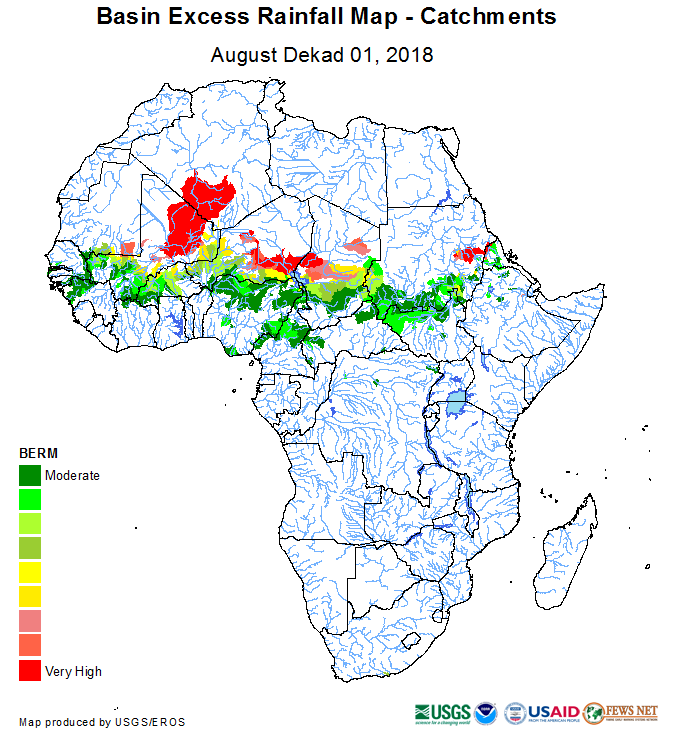 The Global Disaster Alert and Coordination System (GDACS) is a cooperation framework between the United Nations, the European Commission and disaster managers worldwide. Its mission is to improve alerts, information exchange and coordination the first phase after major sudden-onset disasters. The map illustrates disaster alerts in the past 4 days.

The web map allows tracking of hurricanes and connects to other resources such as UNOSAT or JRC maps. Automatic estimates and risk analysis are provided by the European commission Joint Research Centre.

The Hazards Data Distribution System Explorer (HDDS) records known disaster events. After a known flood event, the site lists satellites images that are available for the area of interest. Various satellites will be proposed, including those with associated costs (e.g WorldView 2). These "restricted datasets are available for official response purposes only, and require approved access." However, if final shapefile products after processing from WorldView are available these can be accessed for free. 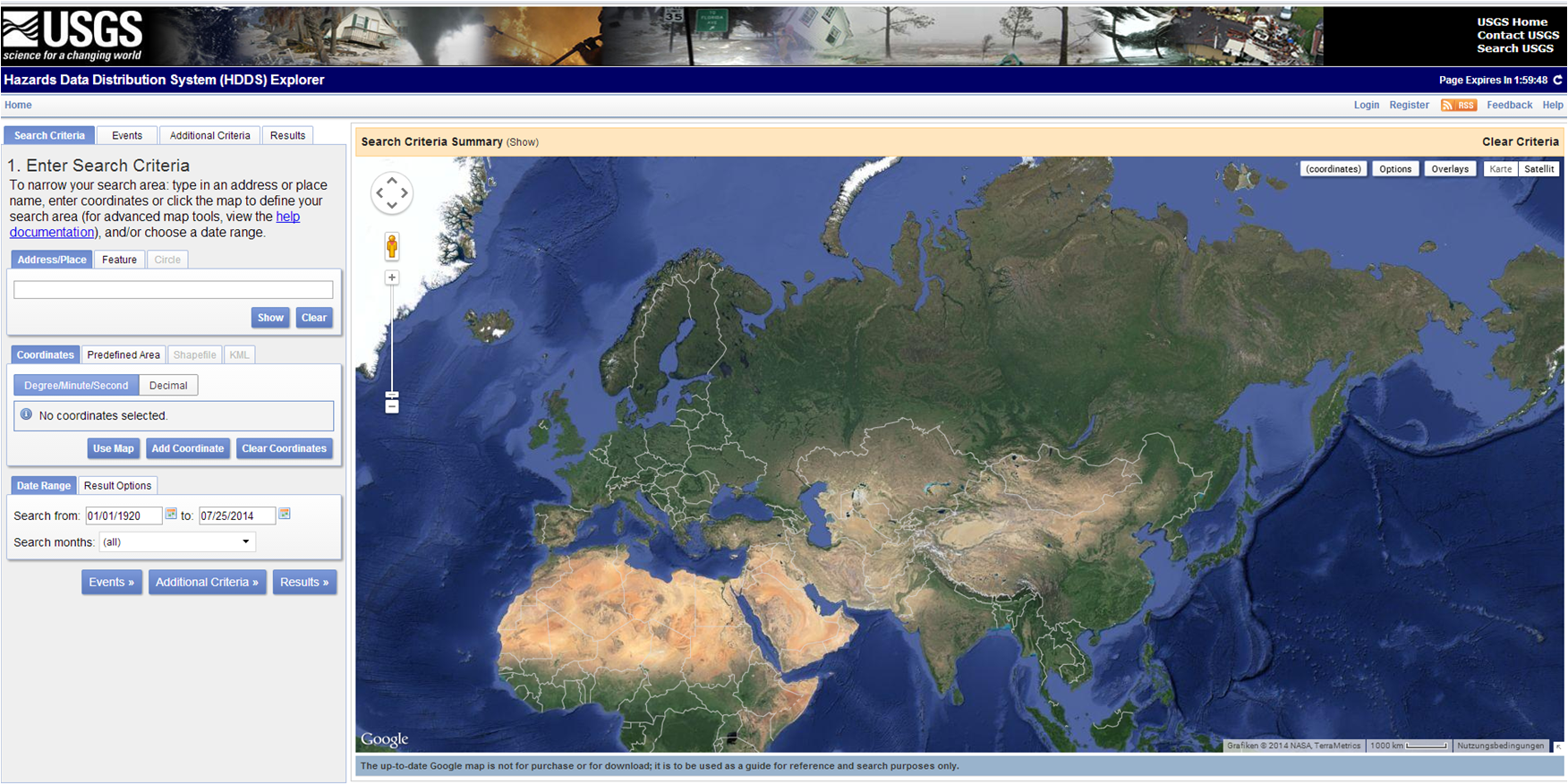 The ITHACA Extreme Rainfall Detection System is a service for the monitoring and forecasting of exceptional rainfall events. Five different alert levels can be downloaded, based on specific rainfall thresholds, defined as the amount of precipitation for a given duration (12 hr, 24 hr, 48 hr, 72 hr, 96 hr). Threshold values were calculated, for every aggregation interval, on the basis of a percentage of the mean annual precipitation. 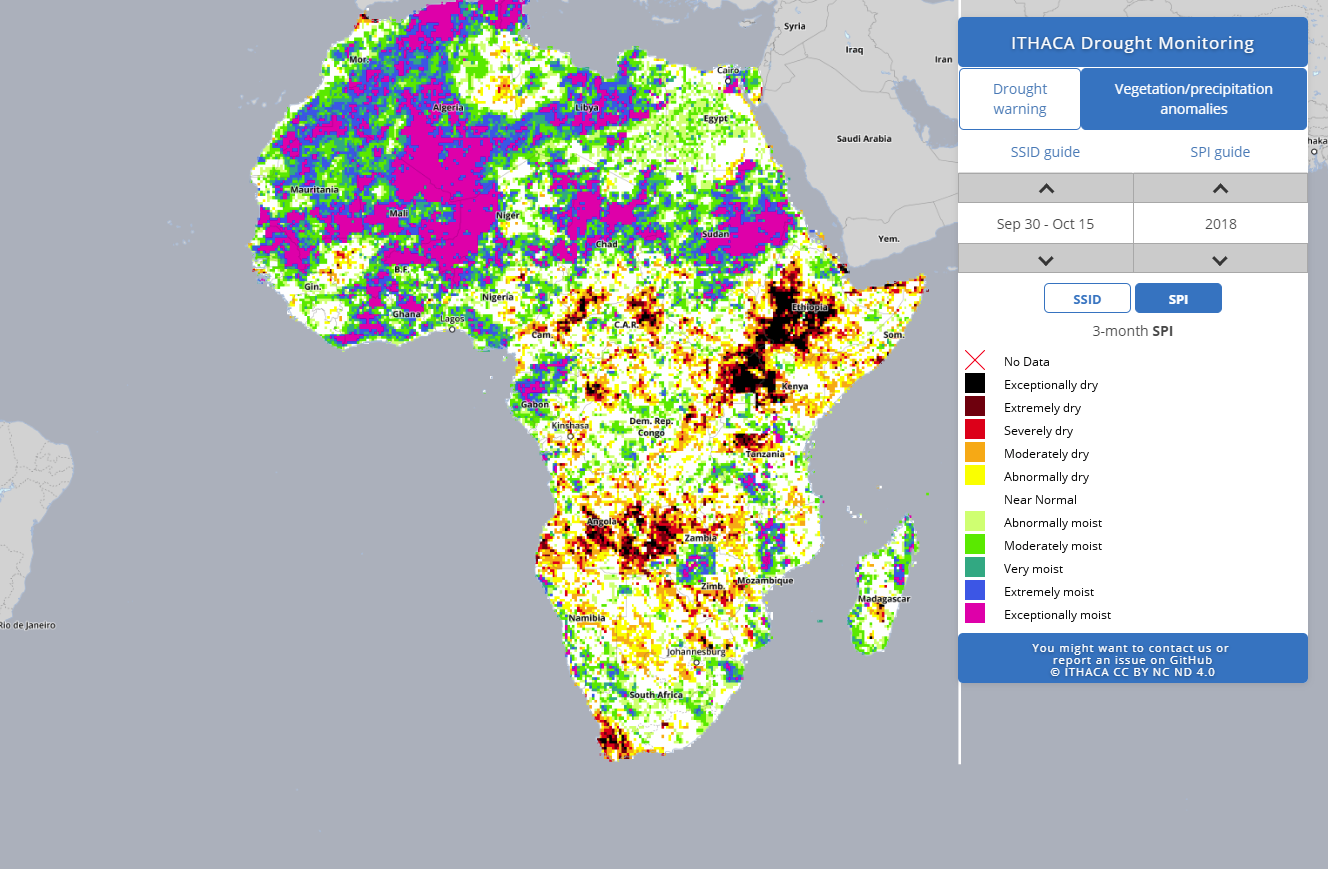 The Risk Data Platform by the United Nations Offices for Disaster Risk Reduction (UNISDR) includes an interactive web map that allows to view flood hazards and estimates of losses related to floods as well as the exposed population. 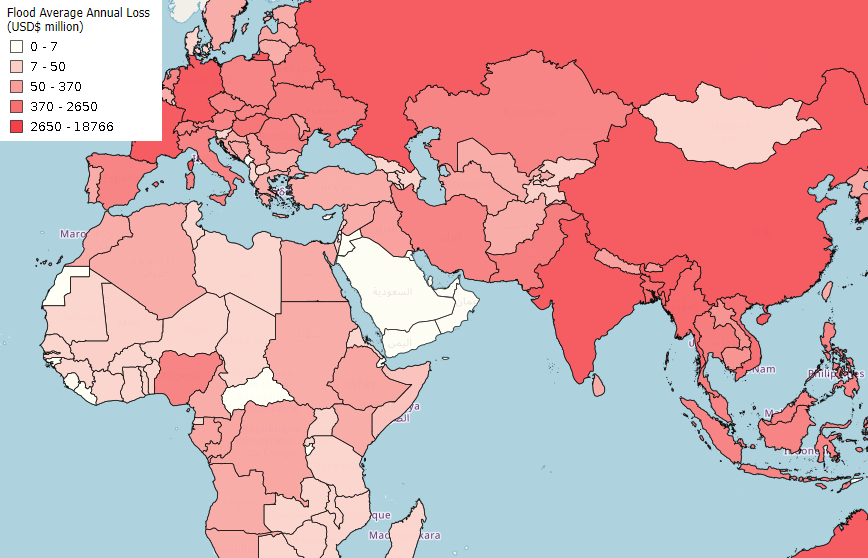 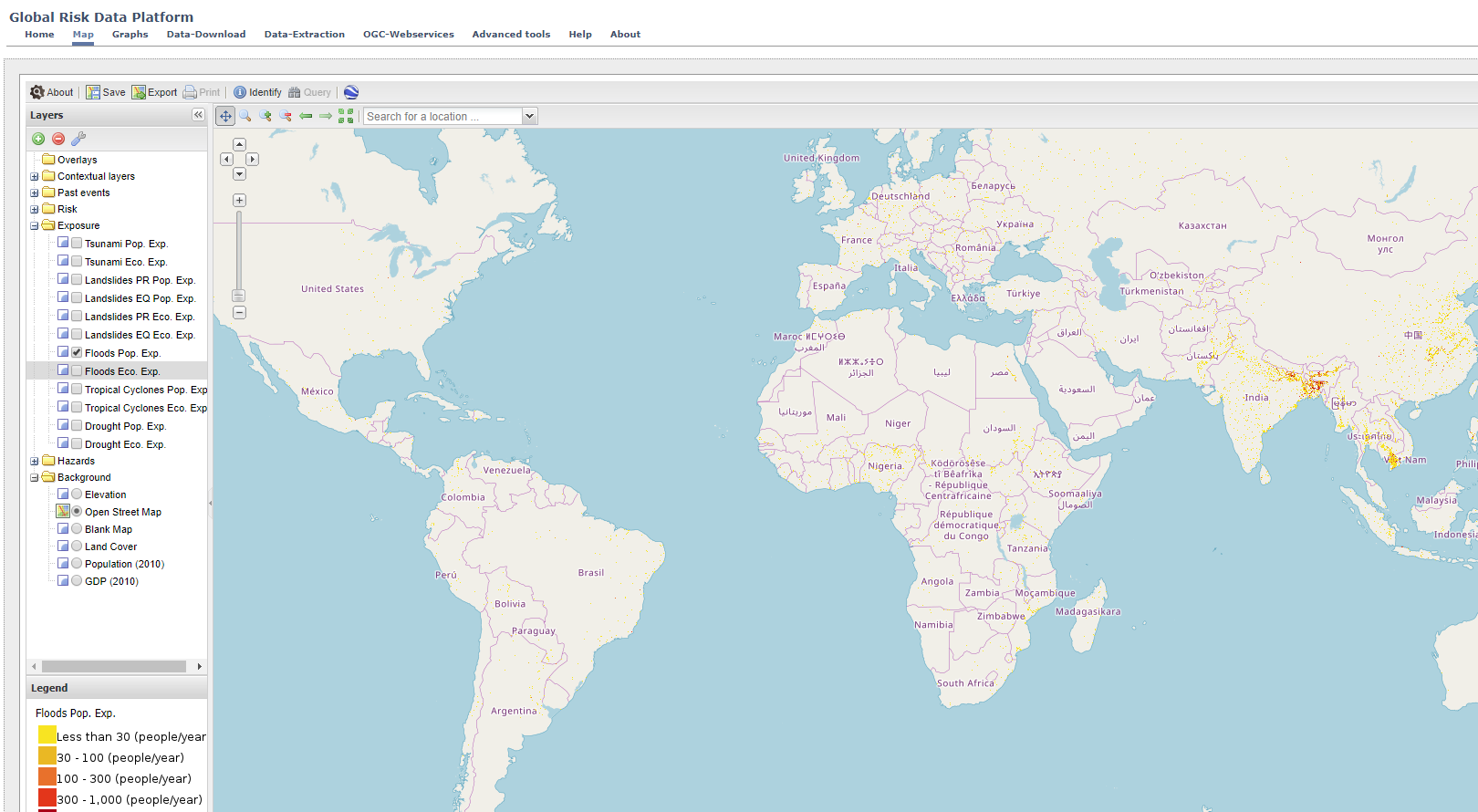 The main purpose of all GAR Atlas datasets is to broadly identify high risk areas at global level and also identifying areas where more detailed data should be collected and where detailed risk assessments are to be performed.

The Aqueduct Global Flood Analyzer is a web-based interactive platform which measures river flood impacts by urban damage, affected GDP, and affected population at the country, state, and river basin scale across the globe, as well as 120 cities. It makes use of a series of models, but no remote sensing activities. Models that are included are hydrological models, global climate models, inundation models and socio-economic models and impact models. Detailed knowledge of the models' assumption is needed to understand where it can be rightfully be applied in decision making, some limitation are listed here. 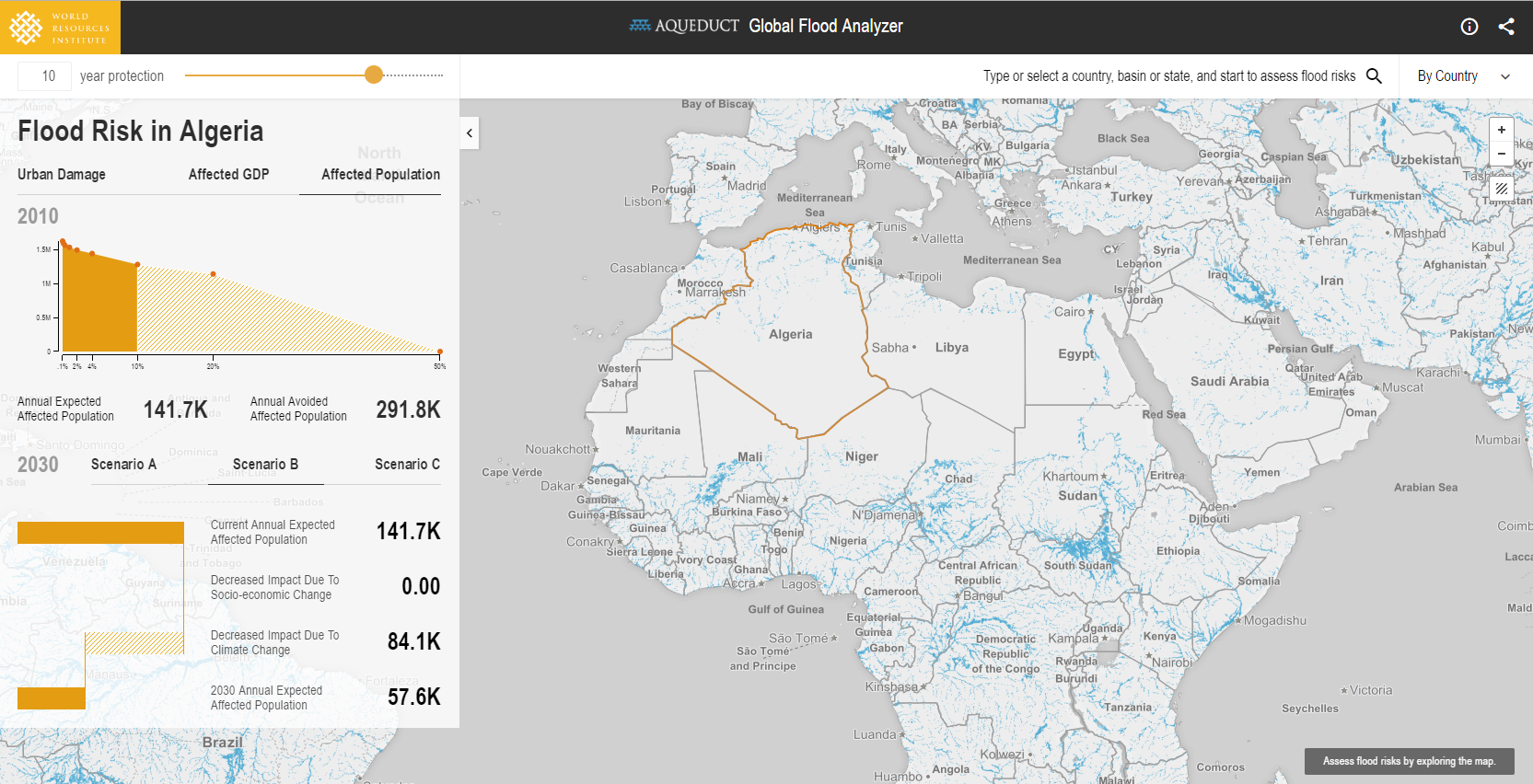 UNISDR's DesInventar, which is part of the Sendai Framework for disaster risk reduction is a joint database recording the number of deaths, damage, economic loss after disasters. The website allows searching of past flood events and visualizing indicators at district level.

DisasterAWARE is an integrated platform, by Pacific Disaster Center, providing situational awareness, decision support, and information exchange capabilities for disaster management. Alerts for its active hazard information are based on information by credible warning agencies (according to the PDC's standards).

The earth observation products provided by the Food and Agriculture Organization of the United Nations are focused on agricultural indexes. The relationship of crop stress, precipitation indexes and mean vegetation indexes and information on the crop growing season also provide value for flood monitoring.

Flood Tools Map my Risk is a tool for personal application for residents of the US. Offered by the private insurance company National Flood Services LLC, it presents a categorized map of flood risk for the continental United States.

The MI-SAFE software and web viewer were developed under the EU funded FP7 project FAST (Foreshore Assessment using Space Technology). The MI-SAFE viewer is meant to illustrate how coastal vegetation can attenuate storm surge wave height for coastal locations anywhere in the world. Vegetation types are based on 2009 Corine Land Cover data, for non temperate zones on a global level, a global distribution of mangroves map from 2011 is applied to indicate whether the encountered vegetation are mangroves.

The Geostationary and JPSS Flood map product is developed by George Mason University and the products are processed in near realtime at the Cooperative Institute for Meteorological Satellite Studies. Funding for this project is provided by NOAA/NESDIS, JPSS Program Office and GOES-R.

More information on the different products, their resolutions and other capabilities, can be found in the NOAA Global Flood Product Quick Guide.

Different presets for visualization in the RealEarth WebMap application can be accessed here.

More useful resources are continuously updated on the Links and Resources Page and can be followed on by joining the UN-SPIDER mailing list.
Finally, if you liked this comparison, but would like even more detail ARSET presents the differences of some of the available flood web maps named above here.