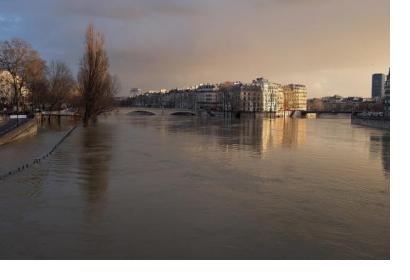 Data from the Global Precipitation Measurement mission (GPM), a joint undertaking of NASA and the Japan Aerospace Exploration Agency (JAXA), has helped determine where the largest rainfall leading to the recent floods in France occurred. The data was examined using NASA's Integrated Multi-satellite Retrievals for GPM (IMERG) algorithm and an IMERG-derived map for the Seine River flooding is available online.

The Copernicus Emergency Management Service was activated on 23 January due to the flooding in France. The floods have caused damage in 242 towns along the Seine River.

The flooding is still affecting large parts of France. The French national weather agency, Meteo France, has issued orange alerts to 11 departments across the country, including the surrounding areas of Paris. The French Flood monitoring agency, Vigicrues, also continues to issue alerts. Such flood warnings are expected to remain in place over the coming days.

IMERG is derived using data from Global Precipitation Measurement mission - a network of international satellites which can measure precipitation from space. Using this dataset, it is possible to calculate the amount of accumulated rainfall for any region over a given period of time.

A major part of the Global Precipitation Measurement mission is to contribute to forecasting of extreme events that cause natural disasters.