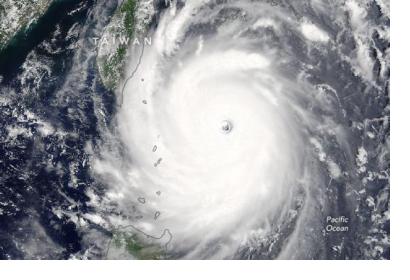 A super-typhoon called Nepartak made landfall in Taiwan (POC) in the morning of the 7th of July 2016. According to the Taiwan’s Central News Agency, at least 69 people were injured.  The cyclone is expected to lead to heavy rainfall across the island before heading to China.

The Moderate Resolution Imaging Spectroradiometer (MODIS) of the National Aeronautics and Space Administration’s Aqua Satellite (NASA) captured space-based imagery of the cyclone on the 6th of July. The NASA’s International Space Station-Rapid Scatterometer (ISS-RapidScat) observed the storm as well and provided a map showing winds narrowing into a vortex.

Read more about it: https://www.theguardian.com/world/2016/jul/08/super-typhoon-nepartak-landfall-taiwan-china