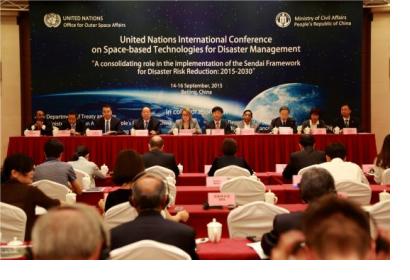 The United Nations International Conference on Space-based Technologies for Disaster Management - "A consolidating role in the implementation of the Sendai Framework for Disaster Risk Reduction: 2015-2030 “ was successfully conducted from 14 to 16 September 2015. The conference was co-organized by UN-SPIDER Beijing Office of the UN Office for Outer Space Affairs (UNOOSA) and the Ministry of Civil Affairs of the People’s Republic of China (PRC), in collaboration with the Department of Treaty and Law, Ministry of Foreign Affairs (MoFA) of PRC, the Department of System Engineering of China National Space Administration (CNSA) of PRC, the Asia Pacific Space Cooperation Organization (APSCO) and with the support of DigitalGlobe.

The conference was attended by more than 100 participants from about 32 countries representing 82 organizations from Asia, Africa, Europe, Latin America and the Caribbean regions to discuss the role of Earth observation technologies in the implementation of the “Sendai Framework on Disaster Risk Reduction: 2015-2030”.

Mr. Gu Chaoxi, Vice Minister of Civil Affairs of PRC, Mr. Mofazzal Hossain Chowdhury, Minister of Disaster Management and Relief of Bangladesh and Ms Simonetta Di Pippo, Director of UNOOSA graced the occasion of opening ceremony along with the senior officials from CNSA, Ministry of Foreign Affairs of PRC and APSCO.

The conference was comprised of a Key note session, 5 plenary sessions, 3 parallel working group sessions, institutional visits to two organisations and a concluding session. The experts and officials from different part of the World led the deliberations in the plenary sessions and parallel working groups. The institutional visits were planned to the  organisations namely, Yungang Satellite Earth Station of CNSA and National Disaster Reduction Centre of China.

The concluding session brought together Chairs of all plenary sessions on the dais and the synthesis of each plenary session was presented by the respective Chair persons. This synthesis captured inputs from all panelists and also reflected the comments and suggestions made by the participants.

The detailed agenda and presentations of the conference can be downloaded from the Conference website.