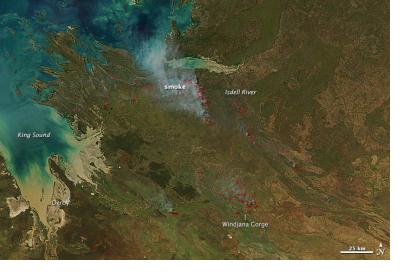 NASA's Aqua satellite with its Moderate Resolution Imaging Spectroradiometer (MODIS) has acquired an image in Kimberly region on 10 April 2013, Australia showing dozens of managed fires. All of the fires were south and west of the Isdell River; some were burning in and near Windjana Gorge National Park, a popular tourist destination. MODIS detected the fires by thermal infrared energy radiating from the land surface. The locations where MODIS detected fire are labeled with red outlines.

Interestingly, the burns visible in this image are part of the Ecofire program managed by the Australian government and by conservation groups. The goal of the program is to reduce destructive late-season fires by increasing the number of early-season fires. Early-season fires are less dangerous as in the beginning of the dry season in April and May, vegetation has dried enough to burn it is still wet enough that fires won’t grow out of control. Because the early fires tend to burn in a patchwork pattern it becomes easier for vegetation to reestablish itself afterwards. Late-season fires, in contrast, often sweep across the landscape and leave expansive burn scars that alter ecosystems for years.