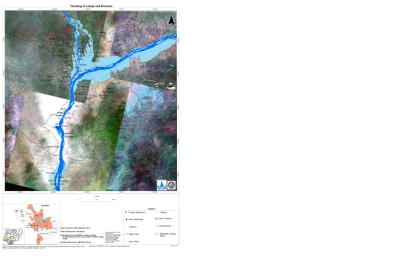 In Nigeria, the Nigerian National Emergency Management Agency (NEMA) activated the Charter on 10 October, 2012. The flood situation in Nigeria, which already led to an activation in late September for Koji State is now reported as being at crisis proportions after affecting Bayelsa State. Virtually all of the communities along the Niger and Benue Rivers have been flooded, and some have been submerged. Bayelsa State is located on the coast of Nigeria, where the rivers empty out into the ocean, and the natural terrain in the area is flat and swamp-land. The flooding in Nigeria has been reported as the worst in 50 years, and though artificial barriers and precautions were in place in Bayelsa State, the flood waters have overwhelmed them. Thousands of people have been left homeless, with both residential and public buildings destroyed. The flood waters have cut off roads to some communities and agriculture has been ravaged by the flood waters, leading to concerns of potential starvation next year. The local population continue to struggle with the situation, displaced from their homes and at risk from disease in some of the worst affected areas. Relief camps have been set up in the Sagbama and Odi communities.