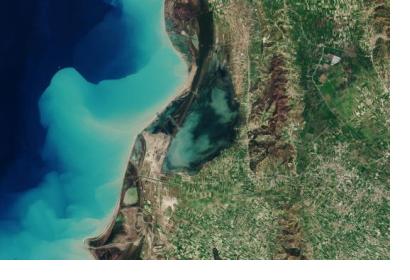 After one week in orbit, ESA’s new Sentinel 2-B satellite delivered its first images of Earth. The first acquisition began over the Baltic sea and made a strip-like observation through eastern Europe down to northern Libya. The images were sent to the Matera ground station in Italy, where they have been processed afterwards. You can see some of the images here: http://www.esa.int/Our_Activities/Observing_the_Earth/Copernicus/Sentinel-2/A_toast_to_Copernicus_Sentinel-2B_as_it_delivers_its_first_images.
The high-resolution of 10 m per pixel images will serve the mission’s land monitoring applications for agriculture, coastal waters and land cover mapping. Along with the Sentinel 2-A, the two satellites now provide a better coverage, which is important for monitoring areas that are often covered by clouds.
As Mr. Josef Aschbacher, Director of ESA’s Earth Observation Programmes, commented, “Sentinel-2B will be one of the workhorses of Copernicus, as it will enable a whole range of applications with a focus on land”.   This new Sentinel 2-B satellite, in combination with the other Sentinel satellites, is geared to contribute to provide operational information on the status of the oceans, the atmosphere and land around the world. As one of the space initiatives of the European Union, the Copernicus programme will contribute to an improved management of the environment, to understand and mitigate the effects of climate change and in disaster risk reduction and emergency response efforts.
A “toast” to Copernicus Sentinel-2B as it delivers its first images.
Sat, 03/18/2017 - 05:12
Global