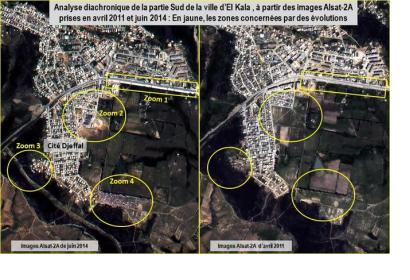 UN-SPIDER’s Regional Support Office in Algeria, the Algerian Space Agency, has recently published the results of bi-phase satellite observations on the towns of El Tarf and El Kala and their surroundings. The goal was to monitor urban sprawl and land use changes that might impact on the environment.

Based on the earth observation satellite imagery, a diachronic analysis using images of Alsat-2A (from two dates: 8 April 2011 and 11 June 2014) was conducted as an effective way of mapping changes in the urban and natural environments. This method of observation highlighted significant changes in construction of infrastructures and dwelling in both cities.

Furthermore, in Oubeira Lake the first stage of eutrophication was detected, a disproportional proliferation of aquatic plants and Lake nutrient, caused by industrial waste and pollution and leading to the reduction of oxygen in water.

Specially, the value of this type of analysis from multi-temporal satellite images, once integrated into a Geographic Information System (GIS), contributes to a database for tracking urban and environmental developments, potentially determinant for decision making, urban planning and environmental protection.