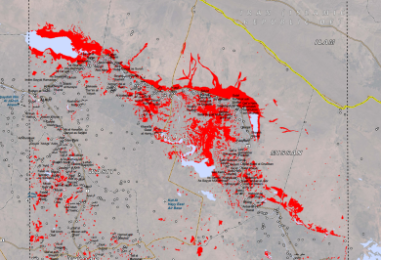 The Iraqi government on Tuesday 7 May 2013 declared a state of maximum alert in all its service agencies to deal with the floods that have affected several cities in southern Iraq since Sunday.

After UN-SPIDER received a request from Iraq to facilitate the acquisition of satellite imagery to assess the extent of the flood and the damages caused, UN-SPIDER activated its network. The Indian Space Agency acquired imagery and UN-SPIDER provided its servers to disseminate the data. The images are processed by UNOSAT by rapid mapping for flood extension. The maps will be made available to Iraq free of charge.

UNOSAT has published the processed product on their website: http://www.unitar.org/unosat/node/44/1744 including the following statement: "This map illustrates satellite-detected areas of flood waters in the Wasit Governorate in eastern Iraq as detected by Resourcesat-2 imagery collected on 7 May 2013. At least 70 towns and villages in the analyzed area are potentially inundated. Multiple sections of roadways are likewise potentially affected. It is likely that flood waters have been systematically underestimated in highly vegetated areas, along main river banks, within built-up urban areas, and in sparse areas of cloud shadow."