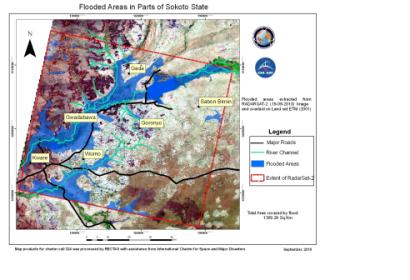 The International Charter "Space and Major Disasters" was activated twice last week to provide space data for floods in South Sudan and Nigeria.

On 24 September 2012, the mechanism was activated for South Sudan by UNITAR/UNOSAT on behalf of WFP. Floods which had began in June have been affecting the Upper Nile state in South Sudan. So far, the flooding has displaced over three thousand people, and at least 15 people have been reported killed. The flooding, caused by heavy rain, has cut off roads to rural areas; preventing supplies from reaching them. Of particular concern is the refugee camps in the area, home to over 100,000 people who had fled the internal conflicts in Sudan. The flood waters make their living conditions even more difficult, and also add further risk of disease.

On 25 September 2012, the Charter was activated by the Nigerian National Emergency Management Agency (NEMA) for floods in Koji State, Nigeria. The recent series of flash floods in west Africa has been reported to be the worst in 50 years. Koji State has been declared a national disaster area by the federal government, with two million people displaced by the floods and some communities submerged. The flooding in Koji State has been reported to be at a level not seen in a hundred years and the flood waters have particularly affected Lokoja, the state capital. Lokoja is located at a confluence between the Niger and Benue Rivers, both of which have flooded. Thousands of people have been stranded on the Abuja-Lokoja-Okene Road, a major transportation route that accounts for 70% of the traffic between the north and south of the country. Parts of the highway have been inundated, further impeding transport. Further contributing to the flood waters are excess water released from the Lagdo Dam in Cameroon and the Shiroro and Kainji Dams in Nigeria. Construction firms have been called in to assess the situation and provide solutions.