NASA: A Look Back at a Decade of Fires 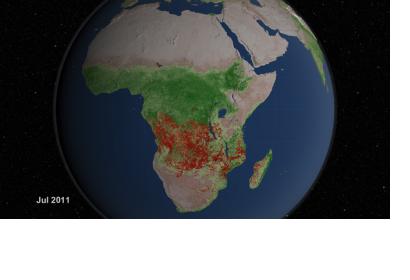 NASA's latest Earth-observing satellite, the NPOESS Preparatory Project (NPP), is scheduled to launch from Vandenberg Air Force Base on Oct. 28 to extend key environmental data records established by an earlier generation of NASA satellites. To mark the launch, they are looking back at one of the scientific legacies NPP will build upon: the global fire data record. An instrument on NPP called the Visible Infrared Imager Radiometer Suite (VIIRS) will extend this decades-long record into the future.

For more than a decade, instruments on Terra and Aqua, two of NASA’s flagship Earth-observing satellites, have scanned the surface of our planet for fires four times a day. The instruments, both Moderate Resolution Imaging Spectroradiometers (MODIS), have revolutionized what scientists know about fire’s role in land cover change, ecosystem processes, and the global carbon cycle by allowing researchers to map the characteristics and global distribution of fires in remarkable detail.

The two instruments have detected more than 40 million actively burning fires and observed nearly 10 billion acres of charred land during tens of thousands of orbits. They have extended and refined upon about 20 years of data from a predecessor instrument -- the Advanced Very High Resolution Radiometer (AVHRR) -- that orbited aboard a series of polar-orbiting weather satellites managed by the National Oceanic and Atmospheric Administration (NOAA).

The unique and comprehensive view of fire that MODIS offers is distinct from anything that aircraft or field research can provide. “MODIS data have enabled a tremendous amount of new fire research, and there will be more to come as the records extend into the future,” said Chris Justice, a University of Maryland scientist who has led the effort to use the MODIS instruments to monitor fires. “It’s essential that we maintain the long-term records of active fire and burned area that MODIS has established and continue them with NPP VIIRS if we want to understand where and how fires are responding to climate change and the activities of a growing human population,” he said.

Over the last decade, the two MODIS instruments have not only mapped the global distribution of fires in unprecedented detail, they have also produced data that have led to major advances in fields as diverse as climate science, public health, and fire management.

For further reading including an in-depth-look into the history of satellite-based fire-monitoring, imagery and videos refer to the source link