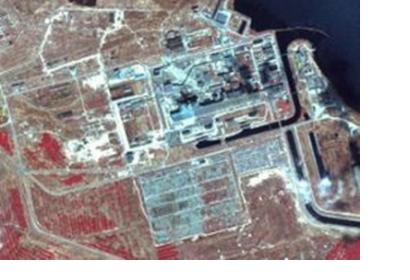 The first satellite image of the Ukrainian site was acquired by SPOT1 only ten days after the explosion demonstrating the value of Earth-imaging satellites in responding to natural and man-made disasters
Technology has evolved in the 25 years since the Chernobyl explosion and Astrium GEO-Information’s satellites continue to keep a watchful eye on the zone.
Toulouse - April 12, 2011 - Astrium GEO-Information Services (formerly Spot Image) has released satellite imagery of the Chernobyl nuclear site covering the 25 years since the disaster in 1986. From the first satellite image acquired by SPOT1 on April 26th 1986 to the high performance radar imagery taken only days ago of the affected area, Astrium GEO-Information Services has effectively monitored Chernobyl for a quarter of a century using the vast data archive containing more than 100 billion square kilometres of imagery.

Since 1986, satellite imagery has played a crucial role in managing disaster zones by providing teams on the ground with comprehensive information for decontamination efforts as well as mapping the resulting reforestation of the area. Astrium GEO-Information Services has published an online flipbook presenting the multisource, multiresolution imagery of the Ukrainian site acquired over the past 25 years. The flipbook illustrates the changes to the area and demonstrates how satellite technology has brought new insights to site monitoring, management and mitigation of disasters since the 1980s: http://www.spotimage.com/FlipBook/Tchernobyl/ENG/index.html