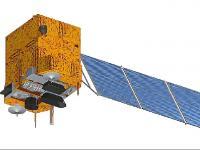 CBERS is a cooperative program between CAST (Chinese Academy of Space Technology) of the People's Republic of China, and INPE (Instituto de Pesquisas Espaciais) of Brazil (government agreement of both countries for the development and operation of two satellites). The program was signed in July 1988 to establish a complete remote sensing system (space and ground segment) to supply both countries with multispectral remotely sensed imagery.
In Nov. 2002, the governments of China and Brazil decided to expand the initial agreement by including another two satellites of the same kind, CBERS-3 and 4, as the second generation of the Sino-Brazilian cooperation effort. The planned cooperative CBERS-3&4 program of CAST and INPE employs enhanced versions of spacecraft and instruments. The specification of the project was agreed upon and closed in July 2004.