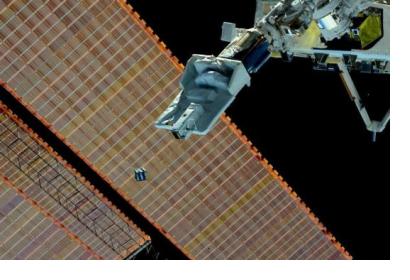 The United Nations Office for Outer Space Affairs (UNOOSA) and the Japan Aerospace Exploration Agency (JAXA) deployed its first cube satellite on 11 May 2018 as part of a joint cooperation programme called KiboCUBE.

The KiboCUBE programme is a capacity-building initiative which enables educational or research institutions from developing countries to deploy cube satellites (CubeSats) from the Japanese Experiment Module (Kibo) of the International Space Station (ISS). It has been designed to support United Nations Member States that do not have sufficient funding available for such activities.

By offering emerging nations the opportunity to deploy CubeSats into space, UNOOSA and JAXA aim to lower the general threshold of engaging in space activities and to increase national capacity in spacecraft engineering, design and construction. This in turn allows more countries to participate in space science and to expand the use of space-based technology for disaster monitoring and prevention. Additionally, the programme seeks to raise awareness of the role that space science and technology plays in promoting sustainable development and disaster preparedness.

KiboCUBE’s first CubeSat was developed by researchers at the University of Nairobi and represents Kenya’s first step towards an Earth observation satellite. It is named “First Kenyan University Nano Satellite-Precursor Flight” (1KUNS-PF) and was deployed to test Kenyan technologies for the future launch of a larger earth observation satellite. Furthermore, the team of researchers plans to use 1KUNS-PF to acquire data for the monitoring of agriculture and coastal areas as well as for disaster monitoring.

UNOOSA Director Simonetta Di Pippo said: "This is a very exciting moment and an important step in UNOOSA's movement towards tangible initiatives in our capacity-building efforts. Innovative projects like KiboCUBE can achieve concrete results and have a real impact on space science and technology development for the benefit of all".

While the Nairobi team has been selected for the first round of the KiboCUBE initiative, UNOOSA and JAXA have chosen experts at the Universidad del Valle de Guatemala to develop the next CubeSat to test equipment for monitoring the concentration of harmful cyanobacteria (algae blooms) over inland bodies of water.