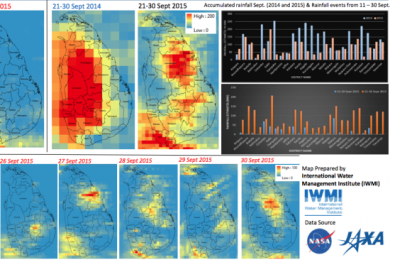 The International Water Management Institute (IWMI) released some imagery from the satellite rainfall estimates for the current flood disasters in Sri Lanka. The Global Precipitation Mission (GPM) and Tropical Rainfall Measuring Mission (TRMM) revealed that the extraordinary flooding in Sri Lanka was caused by unusually strong monsoonal rainfall over the period between 10 September and 30 September 2014.

Massive flooding was reported mainly in the Southern, North central and Uva Province of Sri Lanka. The accumulated rainfall almost tripled in comparison to the rainfall in the same period last year.

Satellite imagery helps to map the affected areas, as well as to compare information of similar periods and analyze the different natural behaviors or disaster events. For instance, the southern provinces districts received an average of accumulated rainfall of more than 100mm from 24 to 30 September this year, while 75mm in 2014.

The Disaster Management Center (DMC) informed that nearly 19 000 people have been affected because of the extreme weather conditions in the south of the country. Satellite imagery also benefits local authorities for early warning and forecasting possible new events.