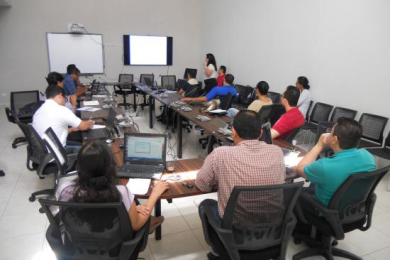 UN-SPIDER conducted a Technical Advisory Mission to Honduras from 13 to 18 July 2015. The mission was conducted at the request of the Permanent Commission for Contingencies of Honduras (COPECO), and was carried out with a team of experts from the Mexican Space Agency (AEM), the Regional Center for Space Science and Technology Education for Latin America and the Caribbean (CRECTEALC), the Federal University of Santa Maria in Brazil, and with experts from two UN-SPIDER Regional Support Offices: the Agustin Codazzi Geographic Institute of Colombia (IGAC) and the Water Center for the Humid Tropics of Latin America and the Caribbean (CATHALAC).

Taking into consideration the exposure of the territory to hurricanes, floods, droughts, forest fires, landslides and tsunamis, the Government of Honduras and COPECO have conducted a variety of efforts to implement the recently established integrated risk management policy. The national territorial ordainment policy now includes the need to incorporate geospatial information on natural hazards as a way to prevent the construction of private and public infrastructure in areas exposed to hazards unless specific measures are incorporated to reduce the possibility of damage or destruction in the future. A specific division within COPECO reviews all requests for building permits as a way to enact a segment of this policy.

As in the case of missions conducted to other countries, this Technical Advisory Mission included meetings with representatives of government Ministries or Secretariats, including the Ministry of the Presidency, the Secretariat of Agriculture and Livestock, the Ministry of Environment and Natural Resources, the Institute for Forestry Conservation, the National Geographic Institute, the National Center for Atmospheric, Oceanographic and Seismic Studies, the National Science and Technology Institute, the United Nations Office in Honduras, and the National Autonomous University of Honduras.

Taking into consideration the exposure of the southern region of Honduras to droughts, the government of Honduras established the Multi-sectorial Committee on Droughts and the Expert Panel on Droughts. At the political level, the Committee coordinates efforts on behalf of the government to cope with the effects of droughts.  At the technical level, the Expert Panel has developed the methodology to monitor the manifestation of droughts as part of the monitoring component of the drought early warning system. The UN-SPIDER mission to Honduras conducted a workshop with the members of the Expert Panel as a way to exchange information on efforts related to droughts. The opportunity was used to make the members of the Expert Panel aware of the regional project conducted by UN-SPIDER focusing on the strengthening of drought early warning systems through the incorporation of the routine use of information on drought indicators derived from MODIS satellite imagery, in particular the Vegetation Condition Index (VCI). The opportunity was used by UN-SPIDER to provide the set of MODIS satellite imagery used to derive the VCI for Honduras and the set of maps of the VCI generated using this imagery spanning the period from January 2001 to May 2015. The mission included a training activity on the use of the step-by-step procedure developed by the Iranian Space Agency to monitor droughts. This procedure has been recently adapted by UN-SPIDER to the open source software entitled “R”. The information on the status of the vegetation provided by the VCI will complement the data on rainfall, population and climate that is already used in the method to monitor drought developed by the Expert Panel on Drought of Honduras.

The mission also included a dedicated segment with the staff of COPECO in charge of the National Emergency Operations Center (NEOC). UN-SPIDER took the opportunity to make COPECO aware of mechanisms such as the International Charter Space and Major Disasters and the COPERNICUS Emergency Management Service. The opportunity was used for the staff of COPECO to interact with the staff of the National Commission on Space Activities of Argentina (CONAE), which is a member of the Charter. These efforts are geared to set up the NEOC as the national focal point regarding the requests for activation of these mechanisms in case of disasters in Honduras.

In the coming weeks, UN-SPIDER will prepare and send COPECO the report of the mission that will include a set of recommendations to be implemented by COPECO and other government agencies as a way to take advantage of the opportunities provided by the space community.