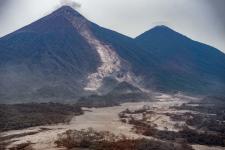 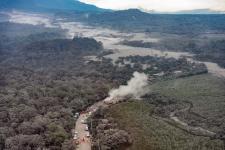 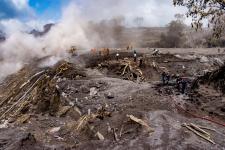 On 3 June 2018, the Fuego volcano erupted violently sending ash clouds up to six thousand meters above sea level and triggering pyroclastic flows that descended through some of its flanks. These pyroclastic flows left  more than one hundred dead, nearly 200 persons missing, and more than 60 injured.  More than 3,600 persons have been evacuated to temporary shelters, and nearly 1.7 million inhabitants have been affected to a lesser degree according to the reports provided by the National Emergency Operations Centre of the Guatemalan Coordinating Agency for Disaster Reduction (CONRED). On 4 June and taking note of these and other impacts, the President of the Republic of Guatemala, Mr. Jimmy Morales, enacted a National Decree of Public Calamity through Governamental Decree 1-2018.  The Decree makes reference to impacts in three provinces or departments: Escuintla, Sacatepequez and Chimaltenango.

Search and rescue activities have continued since the day of the eruption, although at times halted due to new volcanic activity and pyroclastic flows. The National Institute for Seismology, Vulcanology, Meteorology and Hydrology (INSIVUMEH) continues to monitor the activity of the volcano. INSIVUMEH serves officially as the Scientific entity of CONRED.

The International Charter Space and Major Disasters was activated on 5 June 2018 at the request of the National Emergency Operations Centre operated by CONRED and is generating maps of the affected areas. This activation was elevated with the support of the National Commission on Space Activities of Argentina (CONAE), the German Aerospace Centre (DLR) and UN-SPIDER.