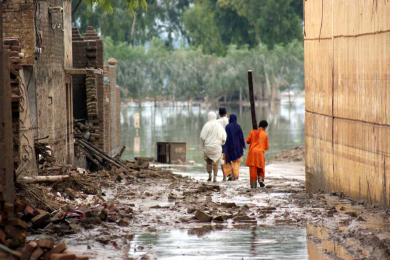 As part of its efforts to help Pakistan tackle natural disasters, the United Nations Educational, Scientific and Cultural Organization (UNESCO) and partners have launched a project to upgrade the early warning system in the South Asian nation, which last year experienced the worst flooding in 80 years.

The project, implemented by UNESCO, in cooperation with the Pakistani Government and the Japan International Cooperation Agency, aims to, among other things, reduce the human and socio-economic impact of the floods and encourage the development of safer dwellings close to flood plains.

There are also plans to draw detailed maps of areas vulnerable to flooding in the Indus valley, according to a news release issued by UNESCO.

“Given that most of the headwaters of the Indus’ main tributaries are in neighbouring countries, the project also aims to establish local and international platforms for the sharing of hydro-meteorological observations,” said the Paris-based agency.

The project will benefit from the technical expertise of the International Centre for Water Hazard and Risk Management, which has developed an integrated flood analysis system using data provided by satellites.