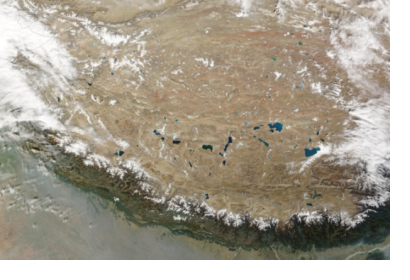 A study conducted by Swiss and Chinese scientists assesses the flood danger posed by glacial lakes across the Tibetan Plateau using an automated satellite survey.

Glacial lake outburst floods (GLOFs) are a major concern throughout the Third Pole Environment, where thousands of glacial lakes have formed and continue to expand in response to climate warming and glacial retreat. This is particular true in the Himalaya, where several disasters occurring over the past century have caused significant loss of life and damage to infrastructure. The fear is that these lakes can overtop their barriers and send floods downstream that overrun settlements.

The study looked at 1,300 of these water bodies that have built up in front of ice streams and which are dammed by rocky debris, and identified 210 lakes (16 per cent) with a potential to threaten communities. This information facilitates targeted local monitoring and other risk reduction strategies.

Glacial Lake Outburst Flood (GLOF) can be caused by a broad number of events, one of the most common across the Tibetan Plateau being an ice avalanche coming down the steep slope of a glacier into the lake to drive a large wave over the dam. It was the potential for just such an event that the team evaluated through a fully automated object assessment scheme implemented using customized GIS tools.

According to Simon Allen, whose group at the University of Zurich worked alongside colleagues from the Institute of Tibetan Plateau Research in Beijing, the assessment carried out in the central Himalaya should be repeated across High Mountain Asia. However, these type of studies have to be repeated every five or 10 years because the lakes are growing and new lakes are formed all the time.