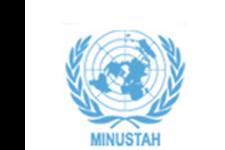 The United Nations Stabilization Mission in Haiti (MINUSTAH) was established on 1 June 2004 after President Bertrand Aristide departed Haiti for exile in the aftermath of an armed conflict which spread to several cities across the country. The devastating earthquake of 12 January 2010, which resulted in more than 220,000 deaths (according to Haitian Government figures), including 96 UN peacekeepers, delivered a severe blow to the country's already shaky economy and infrastructure. The Security Council increased the overall force levels of MINUSTAH to support the immediate recovery, reconstruction and stability efforts in the country. Following the completion of Presidential elections in 2011, MINUSTAH has been working to fulfill its original mandate to restore a secure and stable environment, to promote the political process, to strengthen Haiti’s Government institutions and rule-of-law-structures, as well as to promote and to protect human rights.