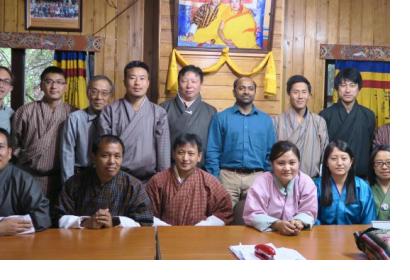 The UN-SPIDER, the UNDP and the Department of Disaster Management (DDM) (Ministry of Home and Cultural Affairs) conducted follow up activities and training workshop as a next step after the UN-SPIDER Technical Advisory Mission (TAM) to Bhutan, offered in June 2014. The activities were executed from 17 to 21 August, 2015.

Soon after the TAM was conducted, the UN Resident Coordinator secured funding to implement the recommendations of the TAM through the UN joint project titled “Recovery Preparedness and Resilience-building in Bhutan”. Through this funding, 19 officials from Bhutan visited the UN Affiliated Centre for Space Science Technology Education in Asia and the Pacific in India to attend one week training programme titled “Response and recovery preparedness” in April 2015. This training provided general understanding on the role of space based information in managing various hazards in Bhutan.

With joint funding from UN-SPIDER and UNDP, the second follow up activity was organized from 17-20 August 2015 with specific focus on landslide, which is one of the most prominent hazards in Bhutan. This follow up activity helped to strengthen DDM mandate on coordinating hazard mapping in Bhutan. As per Disaster Management Act 2013, the DDM, as a secretariat to National Disaster Management Authority (NDMA), should facilitate approval of NDMA to all hazard and vulnerability maps to be used in DRR planning. This follow up visit included two important activities:

The TWG on landslide was proposed during the coordination meetings with all the stakeholder agencies. It focuses on plans and programmes of all agencies related to landslide mitigation and offer a platform to discuss issues such as availability of landslide hazards map, mapping needs, procedures, methodology, sharing of landslide hazard/risk/vulnerability maps, coordination for avoiding duplication, among others. The detailed terms of references of the TWG were formulated through the series of coordination meetings. The TWG will work as one of the Working Groups under the inter-ministerial task force formed as per the Disaster Management Act 2013.

The training workshop on landslide hazard mapping, risk and vulnerability assessment conducted with hands-on sessions. One of the topics covered by the experts during the training was: “Understanding landslides, its causes and principles mitigation”. Pierre Pluto, UNDP consultant, analyzed the Phuentsholing landslides in Bhutan, as a concrete example. A hands-on session and discussions on landslide hazard mapping were conducted by Deo Raj from ICIMOD, in Nepal. Finally, another practical session and discussions on landslide risk and vulnerability analysis were led by Stefan Kienberger from the Salzburg University, in Austria.

13 participants from important stakeholder organisations attended the training and the discussions on formulating the TWG on landslide. The programme was led by Shirish Ravan, Head of UN-SPIDER Beijing Office.