Spectral vegetation indices are among the most commonly used satellite data products for evaluation, monitoring, and measurement of vegetation cover, condition, biophysical processes, and changes. This recommended practice shows how to apply a multi-temporal analysis of MODIS-based Vegetation Condition Index (VCI) to support drought monitoring and early warning. The method has been developed by the Iranian Space Agency and was firstly applied in Iran using ENVI 4.8.

The recommended practice on drought monitoring and early warning was consecutively adapted and updated and can now be followed using ENVI, RStudio and Python. The versions most up to date now also include a cloud mask, which had not been considered before. Also, an additional R script is provided to be able to compute the VCI for large areas (>200.000 km2). The adapted versions were tested in Central America.

A related recommended practice applies the Standardized Vegetation Index (SVI) instead of the Vegetation Condition Index (VCI) for drought monitoring and can be found here.

Drought is a recurring phenomenon that can lead to significant losses to societies affecting different aspects of human life such as agriculture, food security, and the environment. Since 1967 droughts have affected 50% of the 2.8 billion people who suffered from all natural disasters [1].

Traditional methods of drought assessment and monitoring rely on rainfall data. However, this approach has two main disadvantages: rainfall data are limited to the region, and they are often inaccurate and difficult to obtain in near-real time. In contrast, satellite-sensor data is continuously available and can be used to detect the onset of a drought, its duration and magnitude [2]. The purpose of this recommended practice is to monitor impacts of meteorological droughts on natural vegetation (rain fed, range land & forest). Availability, simplicity, free of charge data, good research literature and citation, minimum requirements of inputs are main criteria, which have been considered to define the methodology.

Hydrological drought refers to deficiencies in surface and subsurface water supplies. It is measured as stream flow, snowpack, and as lake and groundwater levels. There is usually a delay between lack of rain or snow and less measurable water in streams, lakes and reservoirs. Therefore, hydrological measurements tend to lag other drought indicators.

Socioeconomic drought occurs when physical water shortages start to affect the health, well-being, and quality of life of the people, or when the drought starts to affect the supply and demand of an economic product.

The figure below shows the relations between these types of drought: 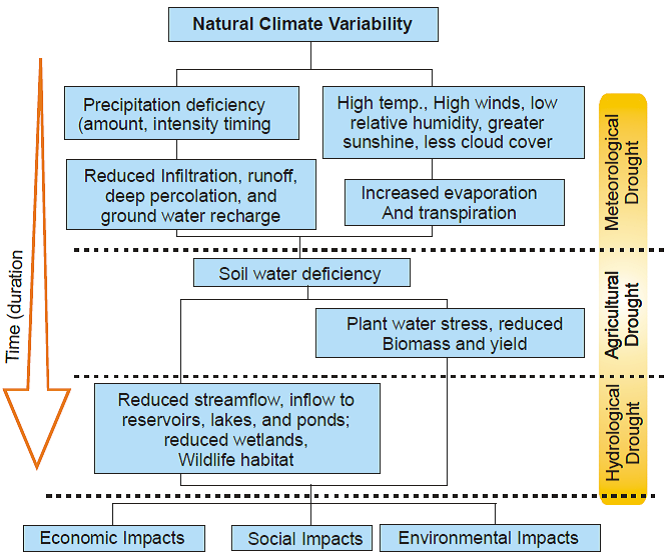 Definition of the VCI

The VCI is calculated as shown below,

The resulting percentage of the observed value is situated between the extreme values (minimum and maximum) in the previous years. Lower and higher values therefore indicate bad and good vegetation state conditions, respectively. 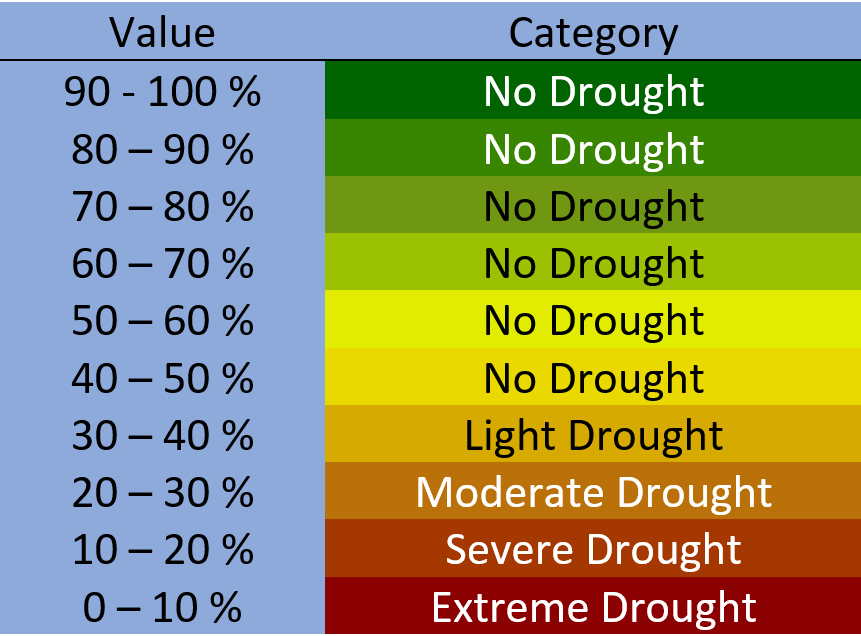 While the first step-by-step instructions for calculating the VCI in ENVI 4.8 and 5.0 as well as the first update in R based the normalized index on the NDVI, the consecutive updates in R as well as the implementation in Python are based on the EVI which has some advantages compared to the NDVI such as

In order to mask out pixels that are impacted by atmospheric interferences such as clouds as well as snow and ice cover, the Pixel Reliability Quality Assurance (QA) layer of MOD13Q1 is being used. The layer classifies the quality of the vegetation index in the following categories:

"Good" and "marginal" data in the pixel reliability bands are accepted as sufficient quality and will be considered for the analysis. Therefore, other filter values than "0" and "1" are used to mask out the corresponding EVI pixels.

MODIS is the primary sensor for monitoring the terrestrial ecosystem in the NASA Earth Observing System (EOS) program [2]. Time series of MODIS imagery provide near real-time and continuous data with a high temporal resolution. The MODIS sensor acquires data in 36 spectral bands, with variable spatial resolution of 250–1000 meters (depending on band), in narrow bandwidths recorded in 12-bit format. MODIS bands are a compromise for atmospheric, land and ocean studies. Seven bands are considered optimal for land applications [3]. MODIS data and products are all available since year 2000.

The results of this study can be used for the development of a regional drought monitoring and risk assessment system. Considering the spread and frequency of droughts in the region on the one hand, and the lack of ground climate observations and technical capacity in the countries of the region to deal with droughts on the other, such a system could play an invaluable role for drought preparedness.

The results can be used as a drought-monitoring tool and as a tool for decision support in regional drought assessment and management. This recommended practice can be applied globally.