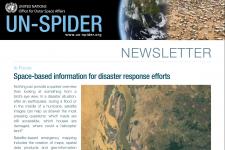 Nothing gives us a quicker overview than looking at something from a bird’s eye view. In a disaster situation, after an earthquake, during a flood or in the middle of a hurricane, satellite images can be determining factors in answering the most pressing questions: which roads are still accessible, which houses are damaged, where could a helicopter land?

Satellite-based emergency mapping includes the creation of maps, spatial data products and geo-information using pre- and post-event imagery from satellites and is essential for situational awareness in case of disasters. The comparison of pre- and post-disaster satellite imagery can identify affected areas and cascading hazards triggered by the initial disaster, such as landslides after an earthquake. In the medium to long term, satellite imagery can be used to identify internally displaced persons (IDP) camps, temporary shelters, and to carry out extensive damage assessments.

Because of its enormous potential to provide vital information for disaster relief operations, UN-SPIDER is striving to enable disaster management agencies in all countries to access, interpret and effectively use the data and information that satellites provide from several hundreds of kilometers above our heads.

To extend the benefits of space data for disaster response, the space community has set up several regional and global emergency mechanisms that provide maps derived from satellite imagery free-of-charge in case of disasters: the International Charter “Space and Major Disasters”, the Copernicus Emergency Management Service and Sentinel Asia.

As part of its work, UN-SPIDER supports developing countries in obtaining maps through these mechanisms, while also strengthening their capacities in using the information products made available during emergency situations. In addition, UN-SPIDER works with the private sector to help developing countries access imagery from companies such as Maxar and Airbus in disaster situations. By connecting end-users to satellite image and service providers, UN-SPIDER bridges the gap between providers and users of satellite imagery.

In this newsletter, we introduce several of these emergency mechanisms, indicate how and by whom their activation can be requested and present some of the information products they develop.