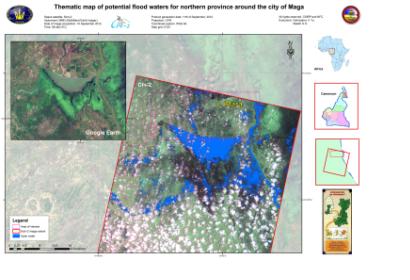 The UN-SPIDER Regional Support Office in Ukraine (Space Research Institute NASU-NSAU) supported the relief efforts following the September floods in Cameroon by providing flood maps. In September 2012, the northern part of Cameroon was hit by severe floods. Subsequently, the International Charter “Space and Major Disasters” was activated to acquire satellite images over affected regions. In the context of this activation, the UN-SPIDER Regional Support Office in Ukraine, the State Space Agency of Ukraine (SSAU) and the Center of the Special Information Receiving and Processing and the Navigating Field Control (CSIRP and NFC) coordinated their efforts in order to acquire images from the Ukrainian remote sensing satellite Sich-2 and deliver maps of flood waters. Two images were acquired: One of the city of Maga (10 September 2012) and one of the city of Garoua (15 September 2012).